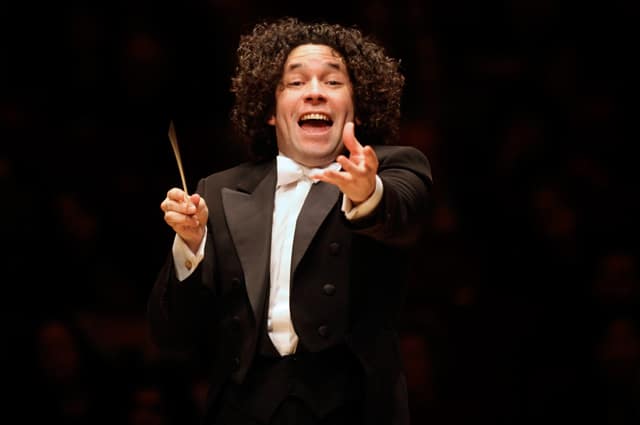 In the second of the Los Angeles Philharmonic’s three appearances at the Barbican this week for its 2016 residency, the sole piece on the programme was Messiaen’s Des canyons aux étoiles. The unique selling point of the performance, conducted by Gustavo Dudamel, was that it was accompanied by visuals designed by Deborah O’Grady, taking the form of video projections that appeared on a huge screen behind the orchestra. With a long cragged board lying in front of this depicting a mountainous landscape, and Seth Reiser and Stephen Terry’s lighting bathing the canopy above the stage in a sunset glow, the whole performance area took on a form akin to the landscapes depicted by Messiaen in his music.

While the images did bring another dimension to the experience, they also perhaps had an effect on how the music itself was played. It certainly seemed as if Dudamel and the orchestra felt that, with the images taking some of the strain, they could afford to take a more insular, introverted approach to the score. With the resulting cool, precise sound creating its own sense of mystery and mysticism, it tapped into both Messiaen’s original intentions and where, it would seem, the orchestra itself sounds best. As a result, the experience felt less like a performance of music with a visual accompaniment, than of an opera in which the orchestra was placed on the stage. This is because in this presentation the visual elements felt integral to the experience as they do in an opera, but the act of still putting the orchestra centre stage meant that the air and silence between the different sections had the space to make their presence felt.

The film included footage that moved in real time and still shots, although the latter sometimes appeared in sequences so that amidst a fixed landscape a bird in mid-flight in one image was suddenly gone in the next. Occasionally, wispy graphics appeared over these, highlighting the spiritual nature of Messiaen’s work, but these were kept to a minimum.

The images depicted deserts, landscapes, canyons, animals, nature, the skies and the cosmos as befitting the movement they were accompanying, and if humans appeared at all it was only as tiny ‘lost’ figures. This, however, still represented a difference between Messiaen and O’Grady’s visits to Bryce and Zion Canyons and the Cedar Breaks National Monument, as the forty years separating them had seen a vast influx of tourists. Images of landscapes were sometimes cropped so there was no horizon, making their power feel even more awesome, and I particularly liked images of trees on the iron red mountainsides of Cedar Breaks that felt reminiscent of Paul Klee’s Redgreen and Violet-Yellow Rhythms.

The vast majority of images had an overriding sense of calm, which worked perfectly because the music carries so much weight and emotion that anything more dynamic would have led to sensory overload. In addition, with notable exceptions such as birdsong that are captured in the music anyway, the scenes Messaien saw in his research for the piece would have been silent. It therefore felt as if the images represented what Messiaen saw, while the music revealed the thoughts and feelings that these generated inside him. The layout of the orchestra saw the four soloists (Joanne Pearce Martin on piano, Andrew Bain on horn, James Babor on xylorimba and Raynor Carroll on glockenspiel) placed in front of the conductor. In the case of Babor and Carroll at least it meant that, as they followed Dudamel, they looked diagonally towards the back of the stage as if they were witnessing these images and playing out their responses to them.

On the other hand, during the horn’s solo during ‘Appel interstellaire’ Bain faced outwards because although the creature, be it man or coyote, may be responding to the world that totally envelopes him, that response very much feels like a cry of isolation or bewilderment. During this solo the images were wisely kept very still as they depicted a slowly rising moon. Similarly, during the piano solos in ‘Le cossyphe d’Heuglin’ and ‘Le moqueur polyglotte’ (Pearce Martin combining coolness and clarity to make the output feel otherworldly) the only images were of a sky and a tree with leaves that appeared luminescent in the bright light.

There were weaker moments too. The layering of images on top of each other during ‘Bryce canyon et les rochers rouge-orange’ felt like an overt attempt to mirror the rhythms and mood of the music, and proved how clever the rest of the film was in doing so far less obviously. In addition, although Messiaen’s creation possesses no conventional narrative, it is astutely structured to create an overall progression through the piece in the same way as a symphony does. Except in the sense that the images supported whatever was happening in the music at the time, they did not seem to possess this same sense of development from start to finish.

Nevertheless, O’Grady’s take can undoubtedly be classed as a success and there is something pleasing about the symmetry between Messiaen’s and her own creations. When the composer visited the relevant sites in 1972 part of his research for the piece involved photographing them. Thus, while his own images inspired his music, it is his music that has inspired O’Grady’s images. The addition of these makes the experience of hearing Messiaen’s Des canyons aux étoiles feel neither more nor less complete than it would be without them. It makes the experience feel as complete, only in different ways, and anything that enables us to see a piece as deep as this in a new light should rightfully be applauded.