Louis Andriessen – The Only One 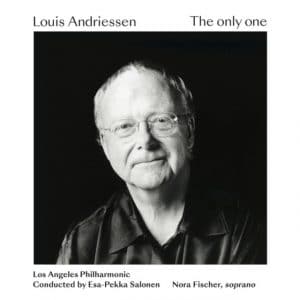 ith the sad announcement late last year that the Dutch composer Louis Andriessen has dementia, each new release of his music takes on an added poignancy. The 81 year-old is said to improvise on the piano every day in his care home, but has completed his published output, establishing himself as one of the most important voices of contemporary music in the second half of the 20th century. The Only One appears near the very end of that output, and Nonesuch have at their disposal a recorded presentation of the premiere, made at Walt Disney Concert Hall in May 2019. Applause and audience noise are filtered out, but the frisson of live music making remains.

Written without constraint for the centenary of the Los Angeles Philharmonic Orchestra, The Only One is a song cycle taking inspiration from the poems of Flemish poet Delphine Lecompte, Andriessen inserting instrumental interludes around her work. The symbolism of the text finds its ideal match in his music, as a childlike figure – represented by the simplicity of Nora Fischer’s singing – comes face to face with the darker realities of the outside world. The final poem, Grown up, presents the most vivid of these experiences, as a man lurks with intent on a nudist beach. Andriessen captures the conflicts of emotion, while elsewhere moments of blissful tenderness are set at odds with similarly dissonant encounters.

The music is economically scored, paring back the strings to just six violins but adding bass guitar and guitar, creating an ensemble with dimensions a composer such as Weill or Stravinsky would have relished. There are refreshingly open textures to give Fischer plenty of room as she sings tenderly in Broken Morning, the emotional centre of the work. The sighing of the strings as she sings “There is nothing I regret’ is a key moment.

The Only One flits from the serious minimalism of its opening to jazzier, Mexican-inflected passages for the brass later on. The influence of Stravinsky on the scoring remains, the lean textures providing plenty of space for the half spoken, half sung vocal delivery. The introduction and first poem have the most distinctive and energetic musical material, piano and guitars driving forward with intent. Interlude 2 has a striking reference to the ‘Dies ‘chant from low in the brass, pulling the ear towards the music.

The Only One feels like a late work. While not having the visceral impact of Andriessen’s bold earlier stage compositions it contains a wealth of life experience. It also has a lingering sadness around the edges. It is boosted by Fischer’s compelling presence. Singing clearly, she commands centre stage, supported Esa-Pekka Salonen’s command of the orchestra. “A bird shrieks that the morning has arrived,” begins The Early Bird, an observation countered by beautiful shifts in the string parts.

Important as this release is, The Only One is only available at full price. Good as its packaging may be, with a duration of barely 20 minutes it is daring pricing in these wallet-tightening times, and you would have to be a firm Andriessen devotee to justify the outlay. Happily, if you are, your reward is a compelling and intriguing work.