Keith McDonnell returns to the Wigmore Hall for another audience attended performance. 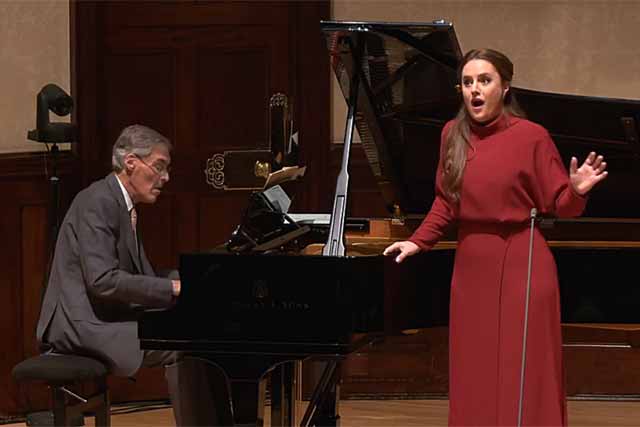 The Wigmore Hall’s mini-season of lunchtime concerts concluded with a showstopper of a recital by the soprano Louise Alder, and her sensitive accompanist, Roger Vignoles. Indeed, it’s hard to imagine a more fitting climax than this wonderfully inventive programme of French and German song that took us on a transformative journey starting with the bucolic romanticism of Fanny Mendelssohn and finishing with the titillating sauciness of Francis Poulenc – and all in just over an hour.

Alder’s prodigious talents as an interpreter of German lied – scrupulous attention to the text, superb diction, and achingly beautiful phrasing were evident in every bar of Mendelssohn’s ‘Bergeslust’ (Mountain Rapture) which opened the recital, but now there’s an added bloom and weight to the voice, which allowed Alder’s voice to take flight at the song’s thrilling climax – ‘Gedanken gehn und Lieder, Fort bis ins Himmelreich’ (‘Thoughts and songs go winging on, till they reach the kingdom of heaven’), filling the hall with voluminous tone. Shading, superb phrasing and introspection drew the listener in to a rapt ‘Warum sind den die Rosen so blass?’ (Why are the roses so pale?), before concluding this set of three songs with a full-voiced, thrilling ‘Nach Süden’ (To the South).

Alder’s ability to switch moods in an instant was evident in a superbly-controlled, hushed ‘Schilflied’ (Reed song), followed by a radiant ‘Die Nachtigall’ (The Nightingale) which was sung with abandon, complete with an abundance of thrillingly voiced stratospheric climaxes that rattled the rafters. 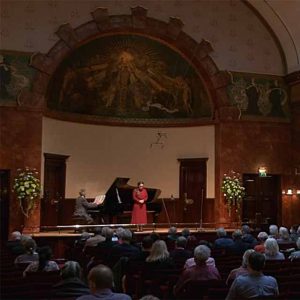 The Gallic charm and insouciance of three Bizet songs was captured perfectly by Alder and Vignoles, capped with a dramatic interpretation, bordering on the operatic, of the penultimate of the three, ‘Ouvre ton coeur’ (Open your heart). Acted out with sly humour, and sung with a glint in her eye, this selection of songs was the perfect foil for what came next, a delightful trio of songs by Poulenc (from Métamorphoses) and Satie. The breathlessness of ‘Reine des mouettes’ (Queen of seagulls) was dispatched with an air of nonchalance, while the dreaminess and sense of fragility of ‘C’est ainsi que tu es’ (That is how you are) was captured perfectly by both Alder and Vignoles.

But it was the extract from Poulenc’s surrealist opera ‘Les mamelles de Tirésias’ (Tirésias’ breasts) that brought together every aspect of Alder’s outstanding vocal and acting skills, showing why she is in such demand both on the concert platform and in the opera house. Replete with a pinny and a feather duster, she dispatched ‘Non, Monsieur, mon mari’ (No my good husband), asserting her feminist credentials over her husband (a superb cameo appearance by baritone Julien van Mallaerts) with intensity and humour, releasing a pair of helium filled breasts that gently floated to the ceiling. A delectable rendition of Satie’s ‘Je te veux’ (I want you) rounded off this exceptional recital, rightly garnering ecstatic applause from the audience, sending us out into a grey and drizzly autumnal afternoon on a high.