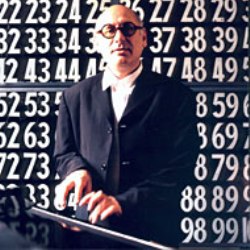 A brave move, pitching an opera’s opening night against the first night of the Proms, but the UK premiere of Love Counts, the second staged collaboration between Michael Nyman and playwright Michael Hastings justified the risk; a subtly inspiring evening. Drawing on Hastings’ personal experience, the libretto calls for only two characters – Patsy Blair, a retired and out of condition middleweight boxer, and Avril Ainger, a university lecturer in mathematics.

The scene is set with the first occasion of the couple’s meeting, with Blair (bass-baritone Andrew Slater) shadowboxing a tree. Avril (soprano Helen Williams) rides past on her bike and, unable to comprehend such a sight, finds her curiosity aroused.

From then on a nicely paced first half draws on the differences between the two characters, inviting sympathy from the audience on both counts. Blair exhibits problems with numeracy, a direct result of too many punches to the brain, and Ainger is on hand to provide help with the aid of visual clues, numbers hung around the stage in strip lighting. This proves an extremely valuable audience diversion, and helps to signpost key events.

Williams does well to capture the pain of Avril’s failed marriage and the emotions stirred as Avril begins to feel affection for her new friend. Slater, meanwhile, catches the oafish nature of the boxer, often speaking before he thinks but possessing nonetheless a sensitive side.

Nyman’s music is key too, written for a chamber ensemble augmented by piano and two keyboards, taut and precise in performance under conductor Paul McGrath. A couple of memorable themes are brought out of the first half, most notably at its climactic end, though Nyman could be judged a little unkind to Slater for such a low register entry at the beginning.

Unfortunately after the interval the momentum stalls somewhat, the scenes frustratingly edited so that the breaks between them become difficult to comprehend. The ending has a neat twist however, the occasionally humorous script with plenty to commend it throughout.

Performances are superb, Williams in particular projecting with great clarity, her words audible even when singing into Slater’s shoulder. The bass-baritone is excellent also, handling the trickier melodies with tuning mostly intact, his speech inflected when required for the role.

Love Counts is not a wholehearted success, then, as the second half could perhaps do with being a good ten minutes shorter, but nonetheless this is a contemporary opera with plenty to offer, and several thoughts to provoke.