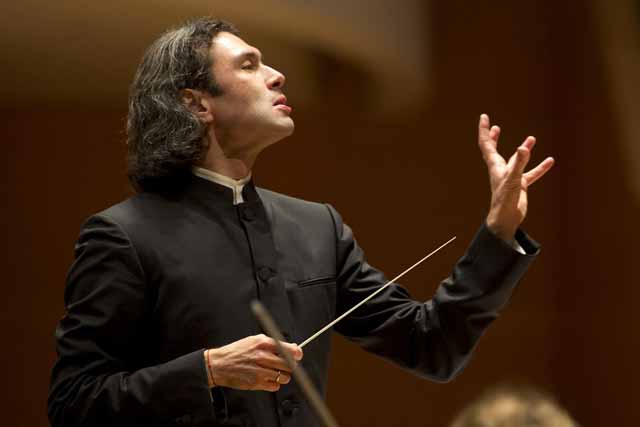 But what form should such a celebration take? Given his symphonies are the bread and butter of every orchestra’s playlist aren’t we in danger that over exposure might lead to saturation? Similarly, any pianist worth their salt will have the German composer’s sonatas at their fingertips, so how do you honour the spirit of one of titans of the musical world?

The London Philharmonic Orchestra is taking a different approach to other orchestras, with an imaginatively curated series of concerts focused on connecting Beethoven’s works with those that came one hundred, and two hundred years later. Titled 2020 Vision, the first of these, 2001: New Century, New Sounds paired his Symphony No. 1 (1801) with Scriabin’s Symphony No.2 (1901) and Peter Eötvös’ Snatches of a Conversation (2001).

The evening began with an invigorating account of Beethoven’s Symphony No.1 with Vladimir Jurowski opting for a hybrid orchestra – original kettle drums and trumpets, but with modern-day horns and woodwind. It worked a treat, and with the violins placed antiphonally there was pinpoint clarity in the musical textures. Vibrato was kept to a minimum, making the string sound cleaner and the phrasing crisper than you’d usually expect from a modern orchestra. After a suitably weighty opening (adagio), the following allegro had enormous guts and drive, with the interplay between the woodwind nicely contrasting with the rhythmic syncopations in the strings.

The second movement kept up the heady momentum, while the jokey third, which takes us on a chromatic journey into D flat major before landing us back in C major via some nifty modulations, bubbled away boisterously. Jurowski took the finale at a lick, which challenged the digital dexterity of the string players, yet some nifty finger-work on their part avoided any passagework being smudged.

It’s hard to define Eötvös’ Snatches of a Conversation for double-bell trumpet, speaker and ensemble. It consists of twelve minutes of an absurdist one way conversation by the narrator, Omar Ebrahim on top form, underpinned by a disparate soundtrack at turns bluesy, dissonant and obtuse, with Marco Blaauw’s double-bell trumpet interjections interspersed throughout. These ears were reminded of a pale imitation of Kagel or Berio, but at least everyone involved threw themselves into the performance, and for that we were grateful.

The evening concluded with Scriabin’s Symphony No. 2. It’s a big, bold, brassy work that holds little back, delivers plenty of volume, yet never totally engages the listener. Whilst rooted in late romanticism, Scriabin’s harmonic language has several toes firmly planted in the twentieth century, so dissonance piles up on dissonance often to jarring effect, given that for the most part we’re sailing in tonal waters. Only in the third movement, with its evocative bird song, sensationally played by principal flute Juliette Bausor, do we experience some respite from the bombast, which then returns at full throttle in the final movement. Reservations aside, it’s only right to report Jurowski and his players gave it their all, almost managing to disguise the symphony’s lack of substance.