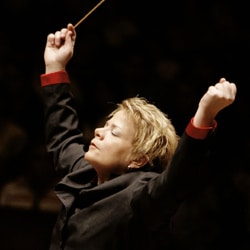 The London Symphony Orchestra and Marin Alsop opened their Joan of Arc Weekend with a spectacular rendition of Arthur Honeggers 1935 dramatic oratorio Jeanne dArc au bcher (Joan of Arc at the Stake).

A relative rarity in British concert halls, the oratorio is arguably the summit of the Swiss composers output, displaying the range and versatility of his craft, from the avant garde to the traditional. Both secular and religious in nature, Jeanne dArc tells the story of the fifteenth century warrior saints martyrdom in reverse, from her condemnation to burn at the stake at Rouen, to her childhood visions at Domrmy. Paul Claudels libretto is mainly delivered through spoken dialogue, but intermingled with solo and choral singing, and by a brilliant orchestral score that includes parts for saxophone, keyboard and ondes Martenot.

Amira Casar took the lead as Joan, speaking her role in an understated, other-worldly, manner, yet also hinting at the saints steely, even inflexible, determination. Her small singing role in Scene XI (Jaccepte cette flame pure) was also affectingly delivered. She was supported by Nicolas Dorian and Mark Antoine in various speaking roles, including Joans aristocratic and ecclesiastical accusers. Their quasi-comic turn during the inquisitional show trial was particularly well done. Only singer David Wilson-Johnson in the speaking role of Brother Dominic, Joans confessor, failed to convince partly the result of imperfect French diction.

In contrast, the singing was uniformly superb. Tenor Paul Nilon and bass Jonathan Lemalu blended well with the actors, while Klara Ek, Katherine Broderick and Kelley OConnor sparkled in the minor roles of the Virgin and Saints Margaret and Catherine. But musically it was the London Symphony Chorus and New London Childrens Choir which gave the most astonishing dramatic performances. Their parts included medieval-style polyphony, traditional French folk songs and crowd sound effects, and they reflected Honeggers varied experience as an enfant terrible member of Les Six and as an accomplished writer of silent film scores. The odd mispronunciation apart, the singing was thoroughly convincing.

All of this took place under the watchful direction of Marin Alsop. Cool and unfaltering, she boldly sculpted out the music for each scene, while eliciting playing of remarkable subtlety from the LSO. Praise, too, for the uncredited lighting technicians, who created a dark and brooding atmosphere in the Barbican Hall, ending with the flickering flames of Joans final moments.