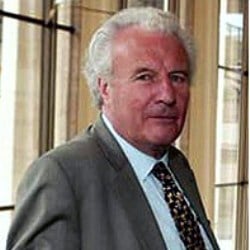 I half expected the London Symphony Orchestra to acknowledge Sir Colin Davis’ entrance tonight with a rendition of ‘Hail to the Chief’.

For this was his first concert as the orchestra’s President, only the fifth person in history to hold the title the previous incumbent was Leonard Bernstein, who died just over 17 years ago.

The title is a good sign that although Sir Colin has now handed over the baton of Principal Conductor to Valery Gergiev, he’ll still be around for plenty of inspired music-making over the coming years.

This concert was a typically emotional and inspiring journey through two of the composers with which Davis is most often associated, Mozart and Elgar. The performance of the latter’s Enigma Variations was especially potent. Elgar’s Variations on an Original Theme date from the final years of the nineteenth century and use the full bloom of the late Romantic orchestra to evoke fourteen pictures from the composer’s life.

In Sir Colin’s hands, this was a vivid reading. The fleet of foot opening variation, depicting Elgar’s wife, brought dexterity from the violins and flutes, whilst the bassoon and clarinet shone in the ensuing movement. Thunderous brass and string playing characterised the variation describing the pompous Squire Baker of Hasfield slamming the door on the way out of his house, and the solo viola of Ysobel.

It was all topped by a dazzlingly architectural performance of Nimrod. Here, the electric relationship between Davis and the LSO meant that the music could grow from nothing into an enormous edifice in the closing bars; at its height, huge shifting chords on the tuba, trombones and trumpets added to its excitement. The remaining movements were equally involving, with prolonged applause after a finale that showed that nobody can quite match this orchestra for their combined technical and emotive powers.

The Mozart works before the interval weren’t quite so consistently impressive. The opening of the Haffner Symphony was vibrant, with leader Gordan Nikolitch spreading the fun and humour of the piece amongst his colleagues, and details such as the ground bass in the lower strings during the exposition were brought out nicely. But why weren’t the violins divided? The sonic effect of this piece depends on being able to hear the antiphony between first and second violins, and this was lost to a degree. Luminosity of tone and lucidity of texture were undermined by a sometimes ponderous tempo in the slow movement and the Minuet; but the Presto was genuinely thrilling, the LSO responding well to Mozart’s extremity of expression (particular commendation is due to the timpani player).

For Mozart’s Piano Concerto No 22 in E flat, the orchestra’s playing was exemplary. Soloist Emanuel Ax doesn’t always convince me in this music, unfortunately: I sometimes felt that the focus was on the technical challenge rather than expression, and the first movement contained a few stumbles. Nevertheless, the slow movement was beautifully done, if a little ponderous again, with flute and oboe in octaves providing a memorable moment, and the finale was full of bounce and fun. Ax communicated admirably well with the other musicians throughout the piece, but it was at this point that both articulation and heart were provided in equal measure, and it was a wonder to behold.

In all, an excellent start to the year for this fine orchestra and the LSO Live recording of the Enigma Variations is something to look forward to.