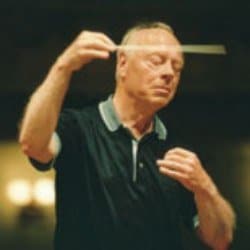 Bernard Haitink’s Beethoven cycle with the London Symphony Orchestra is already synonymous with music-making of the highest quality.

During this fourth concert in the series, however, the Amsterdam-born conductor’s interpretations of these masterworks approached legendary status.

Surely these are amongst the orchestra’s greatest concerts of the decade.

Yet again, one was struck by the freshness of Haitink’s approach to the most familiar music of the concert repertoire.

In his informative article on the back page of the programme, the conductor makes it clear that he comes to this music with an appreciation for what the authenticity movement has brought to classical-period music in terms of precision, whilst retaining the vigour and vibrato of the traditional ‘big band’ style.

It works wonders for Beethoven’s music, which has never sounded so fresh.

For once, the Leonore Overture No 3 was no pipe-opener. In Haitink’s hands, the music gained epic proportions, and the piece was so engrossingly played that it seemed almost like a complete symphony of its own.

Certainly the atmosphere of the opera for which it was written, Fidelio, was captured in the evocation of the prison and the reference to Florestan’s aria in the opening section. Here, the clarinets and particularly the bassoons brought to mind the despair of the scene of the opera, helped by the strings’ murmured accompaniment. Such sensitivity between different sections of an orchestra in a performance of a Beethoven orchestral piece probably hasn’t been heard in London since Simon Rattle conducted the Berlin Philharmonic in the Choral Symphony at the Proms two years ago.

And a rocket seemed to be fired when the fast section of the overture arrived, the violins nearly taking off from their seats, spurred on by dynamic guest leader, Radoslaw Szulc.

The highlight of the evening was the performance of the Fourth Symphony. The benefit of playing the whole cycle in one season was evident. Haitink is a conductor who knows what he wants from his musicians, but more than that, he knows how to get it. And the LSO responded to his every gesture, however slight, resulting in a rewarding performance of one of the less appreciated symphonies.

The contemplative opening section found the horns and flutes in poignant mode, with the strings’ aching accompaniment bringing gravity to the performance. The frenzy which followed was literally breathtaking: trumpet blasts, timpani rolls, and bold syncopation from the strings at the closing of the exposition engaged both the mind and the heart.

The slow movement is one of Beethoven’s finest, combining a clarinet solo (luminously played here) and a jagged dotted rhythm in the strings.

In the third movement, Haitink’s lucid communication of the music’s textural contrasts made it a joy to listen to, and the violins’ cheeky acciaccaturas tinkled wholeheartedly from their instruments; the finale was brisk, with almost maniacal handfuls of semiquavers, and the trumpets were on top form.

After the interval, the Emperor Concerto went by in a flash. Paul Lewis was the soloist, filling in for an indisposed Murray Perahia. Although one was sad to miss the opportunity of hearing the Perahia-Haitink pairing, Lewis’ subtle rendition of the solo part could scarcely have been more intriguing.

The performance was characterised by a combination of poetry and technical security. The first movement is one of the biggest mountains for any pianist to climb in terms of stamina; here, such delicate detail was found in the music that the mountain receded into the background, the technical feat apparently no problem for this fine soloist.

The LSO was unusually engaged with the music often, orchestras are on autopilot during concerti, but here they played with much enthusiasm, drawing Lewis into the ensemble. The oboe and bassoons were especially prominent during the development, laying the ground for the difficult contrary motion passage for the piano, here played with ease.

During the second movement, Lewis’ tone quality was exquisite, yet always projecting into the cavernous hall; the orchestra’s introduction was notably lilting. And has the final movement ever been started with such focus? The main theme was played with uncommon elegance, while Lewis brought a light touch to all the tricky scale passages.

An excellent start to the final leg of Haitink’s Beethoven cycle. Don’t miss the Fifth and Eighth Symphonies on Monday and Tuesday.