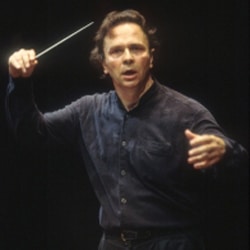 Janáček enthusiasts had plenty to be pleased about in this concert, as Mark Elder and the London Symphony Orchestra gave excellent accounts of three of his compositions. The Jealousy Overture (composed in 1894) was originally intended by Janáček for his opera Jenůfa but eventually – nine years later, apparently – he replaced it with another overture for the opera’s 1904 premiere.

Nevertheless, Janáček remained fond of his first version which ultimately functioned as a concert overture. Elder demonstrated the beauty of the lyrical melodies, but he also took care of Janáček’s vibrant rhythms.

Mark Elder talks to his audience at most (if not all) of his concerts. Indeed, verbal communication has arguably become one of Elder’s trade marks. As he talks both with confidence and with competence, these verbal interludes add further value to his musical offerings. On this occasion Elder elected to talk about Janáček’s rarely performed orchestral ballad The Fiddler’s Child. He told us the story of the ballad and pointed to the unusual combination of the solo violin and four violas representing important characters in the tale. Had time allowed, perhaps Elder could have talked about Janáček’s interest in folk music – hence the folk fiddler of the story – and about the death of Janáček’s own children which might have inspired him to compose this ballad about the folk fiddler and his dead child.

LSO guest leader Andrew Haveron gave a splendid account of the exposed solo violin part. It is no mean feat to lead an orchestra and then in the third item of the concert to perform what amounts to a mini violin concerto. And the four LSO viola players in their solo ensemble gave splendid support.

Janáček’s Taras Bulba is supposed to be a grand work telling the story of three deaths in three movements. Ukranian Cossack hetman Taras Bulba and his two sons die (in one orchestral movement each) in the struggle to gain Ukraine for Russia from the Poles and Lithuanians in the 17th century. Somewhat astonishingly, at least for me, Janáček dedicated Taras Bulba to the Czech armed forces. The programme notes about Taras Bulba for this LSO concert added an extra dimension to the confusion by stating that “The Russians’ short-lived invasion of Hungary during the First World War may have stirred Janáček’s Russophilism”. It is hard to see how such an invasion would have inspired Jancek’s composition of Taras Bulba and, to the best of my knowledge, the Russians did not invade Hungary during the First World War.

The magnificent score – Janáček on top form – provides lively folk dances, dramatic climaxes and beautiful lyrical passages. The narrative of the three deaths is not obvious but the musical grandeur is unquestionable. Mark Elder gave his all and the LSO supported him well. Guest leader Andrew Haveron still had the energy to deliver some beautiful violin solos, while guest principal double bass Petru Iuga also shone in his short but exposed solos. Occasionally pitching was not perfect in one or other of the orchestra sections but surely this is just a drawback of live performance.

In the first half of the concert Joshua Bell played Brahms’ Violin Concerto. Bell’s involvement in the music is exemplary, and his care for beautiful violin sounds and delicate phrases results in very sensitive playing. Bell’s virtuoso violin technique is also of note. However, his approach to what may be described as composed rough passages does not convince. Suddenly loud – and often accented – passages tended to come either slightly early or slightly late. We had beauty in Bell’s performance but not the beast which is also necessary.

Mark Elder was immensely sympathetic to Bell in the violin concerto. His orchestral passages were of substance, thus allowing the violin solo part to achieve the necessary contrast. But at the same time, Elder accompanied (rather than dictated) the soloist. The orchestra’s own warm applause for Elder’s excellent leadership at the end was fully justified, a notable gesture of respect from the musicians to their inspired conductor.