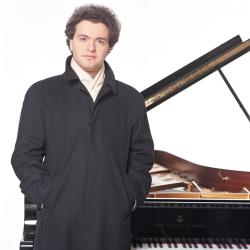 The performance of Sibelius’ First Symphony in the second half of the programme certainly showcased the LSO’s talents in every department.

Music-making of this quality is rare, so thank goodness Sir Colin is staying on to become the orchestra’s President in January.

Admittedly, orchestra, conductor and soloist all seemed half-asleep in parts of the concert’s opening item, Schumann’s Piano Concerto in A minor. At the age of 35, Russian pianist Evgeny Kissin can no longer trade on being a talented young prodigy, and in spite of his technical flair throughout, he just didn’t engage with the emotion or overall structure of the piece in the first two movements. The opening chords were played with amazing skill and accuracy, the descending diminished seventh arpeggios were wonderfully even and the contrapuntal sections were worked out with mathematical precision.

But this high Romantic concerto was taken at such a slow pace that it had almost no momentum at times. Sir Colin looked bored and the LSO sounded in third gear, though the clarinet solos were played with a haunting lilt. The orchestra warmed up a little in the slow movement, but here Kissin’s tendency to hold the music back, plus his slightly monochrome tonal palette, made the whole thing seem a bit disjointed. It was notable that the conductor spent most of his time beating or even singing the tempo to make the soloist catch up. This was to the detriment of the lower strings, who were barely noticed by anyone.

Yet both Kissin and Davis warmed up considerably in the final movement, and the pianist in particular was in his prime. His prodigious technical abilities came to the fore and the music took on a swell and a welcome jauntiness. The LSO’s horns were firm, and the canonic statements in the strings stimulated both heart and intellect. Kissin’s dark masculinity brought a resolve to the final pages, to which orchestra and conductor responded with a spirited accompaniment. As an encore, Kissin offered a piano transcription of Schumann’s Lied Widmung, op. 25/1, the warm A flat major key projecting the kind of romance that one had hoped for in the opening of the concerto.

After the interval came what I can only describe as an exemplary performance of one of Sibelius’ greatest symphonies. The composer may have put off contributing to the genre until almost his thirtieth birthday, but it was more than worth the wait. Sir Colin seems to understand this music instinctively; his spontaneous relationship with the LSO brings out both the poignancy and the drama of the piece. In the opening movement, the clarinet excelled with a long introductory theme over nicely rumbling timpani; the entry of the violins gave thrilling momentum to the performance, the tremoli throughout were exciting, as was the ever-perfect brass (minus a couple of horn blips).

The second movement came into its own with the cellos’ statement of the main theme; lead cellist Moray Welsh remains one of the LSO’s greatest assets. I also liked the point of tension, late in the movement, between the trumpets and violins. Cellos and timpani opened the third movement with biting atmosphere, before the violins, flutes and trumpets each contributed to the fizzing dance rhythms. And the finale was one, long, well-calculated ascent to the peak of the last bars, before the timpani returned for a final roll, bringing the piece to a quiet end with two string pizzicato chords.

The presence of microphones at the concert means that the Sibelius piece will be released on the LSO’s in-house record label, capturing this special performance on disc for posterity.