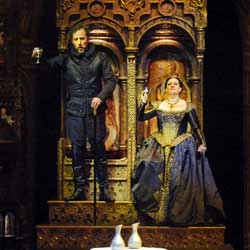 Film director Mike Figgis production of Donizettis Lucrezia Borgia, currently playing at ENO, is his first foray into opera directing, and he controversially attempts to marry the genres of opera and film throughout Donizettis work.

This production is nothing if not innovative. Donizettis four scenes are each preceded by a short film, displaying Figgis exemplary cinematic expertise. These films show some of the background to the story, depicting Lucrezia Borgias life around the time her son Gennaro was born. Each film is an absolute gem; excellent acting and stunning special effects aside, the films also invoke in the audience feelings of sympathy for Lucrezia, which puts a completely new spin on the story.

Ultimately, however, Figgis juxtaposition of film and opera doesnt quite work. The main issue is that the immediate drama and energy of the films is not reflected in the staging of the opera itself. Es Devlins beautifully picturesque sets, Peter Mumfords dramatic lighting designs and Brigitte Reiffenstuels fabulous costumes unfortunately dont conceal the fact that the performers are actually doing very little on stage. The blocking is almost uniformly static, with chorus and principals alike delivering their music from one position. Whilst Figgis explains his artistic reasons for this in the programme, my feeling is that this opera needs more visual aspects to work. Donizettis light, late Classical score carries less dramatic weight to the modern ear than some operas, and I feel that the drama cannot be solely left to the music. To me, sadly it just looks like someone has taken an old-fashioned production from the stand and deliver school of singing (a far cry from ENOs usual productions) and imposed some clever films on top.

As it stands, the transition from film to opera back to film again is not made easy for the audience, and one comes away feeling that the opera itself just doesnt cut it visually or dramatically. Also, for most of the films, the background music is recorded, which further serves to heighten the sense of discontinuity it would have been much more congruent to have had the orchestra play the film scores. However, the one place where the film and opera collaboration works really well is during the last film, which is a beautiful recreation of two famous paintings of the period. The smooth interplay between art and film ties in with the interdisciplinary aspect of the whole production, and makes the transition back to opera afterwards much smoother.

Soprano Claire Rutter in the title role improved vastly throughout the night. Diction issues and a rather small sound at the start of the performance meant that she was overpowered by the orchestra for much of the first act. The second act, however, included a near-perfect rendition of Era desso il figlio mio, where her rich tone and immaculate coloratura lent some real emotion and excitement to the aria.

Alastair Miles, aside from possessing an extremely powerful bass-baritone, also gave one of the most dramatically captivating performances of the evening in his role as Lucrezia Borgias husband, Alfonso dEste. His dark, expansive and open sound, coupled with perfect diction, soared over ENOs excellent orchestra with perfect ease, and his tall imposing figure and confident manner on stage added real dramatic weight to his performance. An excellent performance also came from Michael Fabiano in the role of Gennaro. His crisp, free and sprightly tenor displays a vocal maturity far beyond his years, whilst still retaining a youthful lightness that made his portrayal of the young nobleman totally convincing. In the smaller roles, ENOs casting was uniformly excellent, with Jonathan Stoughtons sparkling tenor particularly standing out in his role as Vitellozzo.

Some of the evenings most sumptuous singing came from mezzo-soprano Elizabeth DeShong in her ENO debut as Maffio Orsini. Rock-solid technique allowed her rounded and fruity tone to fill the Coliseum and extend right through her range (this role spans over two octaves) and during the second act she treated the audience to some absolutely breathtaking cadenzas. Hers is a completely electrifying voice and one that should definitely be invited back to The Coliseum.

Whilst this is a beautifully sung production with some lovely effects and clever ideas, unfortunately it didnt quite come together in the end for me. Still, its worth seeing aurally its a treat, and conceptually it is both thought-provoking and stimulating it just needs more visual continuity throughout to be truly stunning.