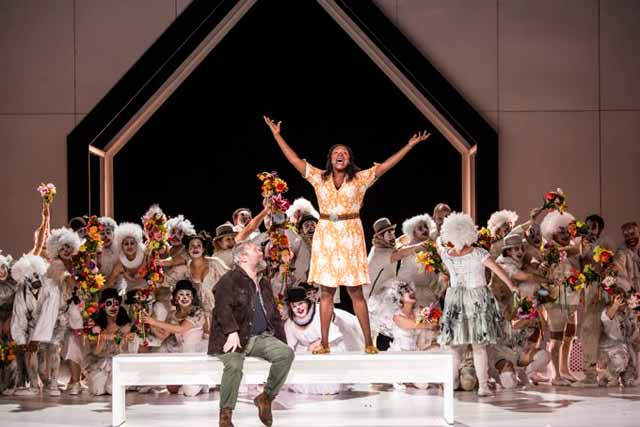 Verdi’s Luisa Miller is rarely staged in London, so this production from German-based Czech director Barbora Horáková, a longtime collaborator of Calixto Bieito, was sure to be an event. Her bleak vision of this Schiller inspired drama, a co-production from English National Opera with Oper Wuppertal, has its share of pitfalls but also plenty of raw power.

Some in the audience no doubt found the Regietheatre tropes tiresome: child actors, needless handguns, popping pills, strip lighting, smeared fluids. The bucolic village setting and class dynamics in Schiller and librettist Cammarano are either jettisoned or more starkly reformulated: the chorus are ragged, ghoulish clowns, Count Walter is less aristocratic nobleman than an oil baron, whose drums of black ooze dirty the pristine walls. Any sympathy implied for the latter is ditched for an altogether grimmer presentation – the gratuitous beating of a naked boy undercut his tender Act I aria – and he represents the vile enchantments of power and display (he organises an impromptu sweepstake as his son brawls with his goons).

What compels is the show’s forensic cynicism about men and fathers. ‘I rule by love and kindness’, Olafur Sigurdarson’s Miller sings in Act I, ‘not by command’; ‘I am her father, not a dictator’, he implores to Wurm. As a traumatised soldier Miller cast a dark and compelling shadow – emotionally brittle, utterly dependent on his daughter, but prone – like a Rigoletto or Wozzeck – to shattering outbursts of anger and violence. There was raw pathos at the moment he cradled a scarecrow pierced with arrows as if still on the battlefield; his Act III extended duet with his daughter, as she attempts suicide with a handful of his own anti-depressants, was heart breaking. 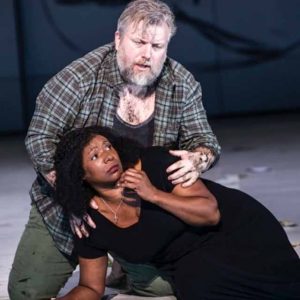 The clinical, unyielding white surfaces and unsympathetic strip lights means that the cruelty and power emanating from the men in it – even the frail, shattered ones – is all the more visceral. The smears of ink and oil describe how dirty and suffocating the obligations of power and family are. Emphasizing the lyrical qualities of the score makes Verdi emotionally unbending but painfully acute; with tenderness in the music belonging to a reopened wound. Whilst its lean spectacle is compelling, some of the innovations feel both needlessly busy and under-developed.

Animating energy came from Alexander Joel in the pit. The overture, with its nervous, distracted silences, was fizzy and febrile; the orchestra’s contributions in Act III whipped up a frenzy in support of thrilling singing from David Junghoon Kim’s Rodolfo and Elizabeth Llewellyn’s Luisa. Joel’s eye for detail in this vivid score was keen: the grotesquely chromatic low flute line in the final scene chilled the bones.

An uneven production but hardly one that warranted the boos that greeted the production team. Vocally it could barely be faulted. Christine Rice’s Frederica was luxury casting for a small role but made her few scenes count, even if the character Verdi gives us is a bit of a placeholder for the plot; the same can be said of Nadine Benjamin’s Laura. James Cresswell certainly seemed to relish the swagger of his unequivocal bad guy status as the Count.

Solomon Howard made a blistering ENO debut as Wurm. He is a scintillating dramatic and vocal presence, skilfully articulating Horáková’s mixed bag of an imaginative vision. His timbre has an oaky strength, and physically he is imposing and handsomely muscular. His portrait of Wurm has a tenderness and vulnerability married to a brooding, sulky presence that goes some way to opening up the wounded masculinity at the heart of the show; his elegant, lithe movements made concrete his connection with the dancers who represent aspects of his character.

David Junghoon Kim might be a less natural actor than his peers onstage but his Rodolfo is full of light and energy, notwithstanding a few eccentric vowels, and his flexibility and strength mark him as a natural Verdi tenor. His ‘Quando le sere al placido’ showcased his lyrical control. Elizabeth Llewellyn’s Luisa wanted for power early in the evening and struggled to rein in a wayward vibrato, but shone as the evening went on, particularly in her stunning duets with Rodolfo which glowed with musical and emotional warmth.