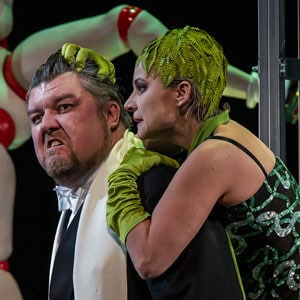 Controlling a packed pit of musicians – like the Animal Tamer in the opera’s opening scene – conductor Lothar Koenigs, Music Director of the Welsh National Opera, constructed a powerful and resilient foundation from the orchestra and a blistering performance in this superb production directed by David Pountney.

Lulu is hardly an easy opera on any level: everyone – orchestra, conductor, singers and audience – is challenged by it and this production, of immense strength and persuasiveness, provided an evening that raised many questions and gave much food for thought, leaving one to go home without knowing all the answers.

Berg’s disturbing and ultimately despairing satire – at some times almost as much a surrealist cabaret show as an opera – which spirals down through sexual tension and into the moral depths, combines two plays by Wedekind, Pandora’s Box and Earth Spirit, which were officially forbidden yet had still achieved cult status when Berg saw the first of them in 1905. He started work on the opera twenty four years later and on his death in 1935 it was unfinished; this production utilises the Third Act completed by Friedrich Cerha, which premiered in 1979.

In the Prologue, in which the Animal Tamer, strongly and disturbingly sung by Richard Angas, later doubling as the strange and ambiguous character Schigolch, introduces his menagerie of performing animals, inviting us to witness the human zoo we are about to see. One by one they parade in the circus ring, or clamber round the bars which make up Johan Engels’ huge metal-framed set: a big-top, a cage with a spiral staircase and entrances and exits at  various levels – or an abattoir in which the collected corpses of husband after husband are winched up and hang from the roof. This is the world Lulu inhabits and finally, as the Snake, she emerges from a body bag: a vivid image which defines her role, enhanced by the sinuous, enamelled designs of Marie-Jeanne Lecca.

Marie Arnet’s outstanding Lulu leads a superlative cast and gives a bravura performance contributing assured delivery and amazing ornamentation, a voice that snakes so quickly, but with dramatic shape and outstanding sensuality. She fearlessly creates the theatrical nature of the role and then lives up to its exorbitant demands, her tantalising attractiveness to the men around her, mesmerised by her seeming indifference, staring through them rather than at them – and driving them to crazy extremes.

This power that Lulu exerts is reflected back by the characterisation of her symmetrical opposite, Dr Schön, the ‘man of power’ who, like Shaw’s Professor Higgins, picked her up off the street as a girl selling flowers and set in train this horror version of Pygmalion. Ashley Holland takes the other double role, as Dr Schön and Jack the Ripper, singing both with convincing authority, in the former with yearning lyricism but the latter with chillingly persuasive clarity and depth of tone. Thus it is the same man, who at the end temporarily demonstrates his power in the only way he can, by a violent, squalid act with a knife which simply reinforces his powerlessness over the Lulus yet to come.

Peter Hoare gave a compelling portrait of Alwa, Schön’s son – but another of the succession of Lulu’s admirers and lovers, singing the lush, near Straussian love-music Berg wrote for them with lyricism and freedom. Rebecca Afonwy-Jones took over from an indisposed Natascha Petrinsky and sang a convincing Countess Geschwitz.

The staging made little attempt to distinguish the geographical settings, but the opera’s trajectory is a moral one, up through louche high-life of Austria then falling via Paris and the Jungfrau railway – the translation Virgin Trains could hardly be more apposite – to prostitution, murder and Liebestod in the East End of London.

At the finale the wandering Animal Tamer enters once more, just as he did at the opening of Act I, and out of the same body bag a female arm now extends a hand – bearing a golden apple. Once more the Snake is offering the forbidden fruit to mankind – and once more the cycle we have witnessed will repeat itself.

Magnificent and passionate playing by the WNO orchestra brought out the intricate symmetrical beauty of this demanding and wonderful piece of musical architecture engineered by Berg. This was the first in the WNO’s ‘Free Spirit’ season of female characters who exist outside conventional contemporary canons of behaviour or morality, and collaboration between the Artistic and Musical Directors who suggest great hopes for productions in the coming seasons from WNO.