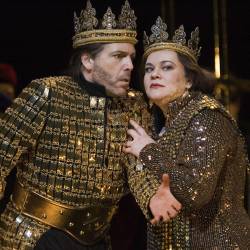 It would not be sensible to stage Verdis Macbeth too literally nowadays, and the power of Phyllida Lloyds production for the Royal Opera lies in her combination of retaining the essential plot and loading extra meanings and symbolism onto it.

Aside from the witches, who were somewhat over-choreographed for my liking, Lloyds production remains as exciting as it was when it was new to the House in 2002.

Large gold cages encircling the Macbeths and their hollow crown, diagonal shafts of light to represent the dagger whose handle cannot be grasped, and a running tap of water, in which the murderers try in vain to wash their hands of their crime, are just three of the effective gestures.

Also successful is the staging of the Chorus of the Scottish Refugees in Act IV, when the Macbeths are sleeping in separate beds as the chorus comes downstage and surrounds them, laying their plight at the hands of the evil doers. The apparitions are convincingly chilling, and it all looks splendid in Anthony Wards designs and Paule Constables atmospheric lighting. The direction is also engaging; for once theres a believable attraction between the two protagonists, an unlikely pair of lovers for a Verdi opera.

The character of Macbeth has two tragic flaws. Ambition is the textbook answer, but his wife is no less of an influence, especially when she is so dominatingly acted and thrillingly sung as in this performance by Violeta Urmana. Her Verdi roles are always a treat, and her Gioconda was excellent in 2004, but this was something special. If she didnt quite convince in the high tessitura of her aria in Act I, this was compensated for by a sharper attack in the Act II Brindisi. The sleepwalking scene was delivered with imagination, neither too histrionic nor too beautiful. And until I saw Robert Gleadow in the role, I didnt think of the Doctor as much of a character in Macbeth, but his interaction with Lady M in this scene was crucial. His voice is ideal for this music; here is surely one of the great artists of the future.

Although Thomas Hampson has been criticised for his Verdi in the past, only pedants and snobs could dismiss his portrayal of Macbeth. His voice is lyrical, and he makes a lot more of the words than many a famous Italian baritone, thanks to his ability as a Lied singer. His Macbeth really is a great tragic figure, and one could believe in his delirium after his murder of Duncan, leading to all the further crimes. How could Verdi be unhappy with such a combination?

John Relyea was a mighty Banquo, with a velvety voice and imposing presence, whilst Joseph Calleja was a bit wooden as Macduff. However, the big aria in the final act, Ah, la paterno mano, showed Calleja with more weight than his lyric tenor has previously suggested, and this was a big improvement on his Alfredo in last years Traviata.

The chorus rose to many of the big moments especially the largo concertante of the first act but the witches were feeble at the opening and out of synch with the orchestra at the start of Act III. Yakov Kreizberg made sure the music was always exciting, though at times the texture was too dense and not quite elegant enough for Verdi in this period.

Nevertheless, it was the best of the three Verdi revivals of the year, and very exciting. The company is on excellent form, which bodes well for their stonking production of Wozzeck, returning for the first time next week. Dont miss either of them.