The Wigmore continues its defiance of Covid-19 with a full concert season. Benjamin Poore was there. 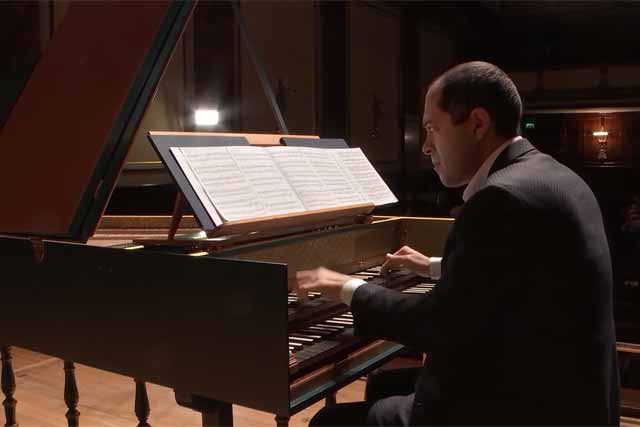 Mahan Esfahani is renowned for his sense of musical adventure, making the harpsichord span the centuries through both his choice of repertoire and his daring interpretations of the classics, particularly Bach. His return to the Wigmore Hall after lockdown promised three of Bach’s French Suites (C minor, B minor, and E-flat major), alongside the Suite in A minor (the rarer BWV 818a) – as well as a single fantasia and fugue.

It’s quite a lot of Bach for an uninterrupted ninety minute stretch – one that would probably challenge all but the most serious harpsichord aficionados. However, Esfahani’s instrument alone can produce a variety of timbres so striking that the ear can scarce tire. In BWV 814’s Minuet a combination of stops produced a sound remarkably like wooden and mallet percussion, as if Bach were being performed on xylophone or marimba; in the C minor suite’s Allemande Esfahani discovered dusky, Mediterranean qualities in the instrument’s guitar-like tones. Such an inventive colour palette is unsurprising from a performed who has most recently released an album of experimental electro-acoustic music for harpsichord.

Esfahani’s spoken introductions to the music are integral to his performances. Like his playing they are also tricksy and teasing, with just as many hints of melodrama and mischief. “On Mondays, Wednesdays, and Fridays I think this work is by Bach”, he said of the Suite in A minor, “on Tuesdays, Thursdays, and Saturdays, I’m not so sure.” But he is also authoritative and compelling – a great teacher in both words and music – speaking engagingly about Bach’s pedagogical habits and the textual genesis of works like the Prelude in A Minor (BWV 922) and Fugue in B minor (BWV 951). “These are works by Bach, and not by Bach”, he teased.

The story goes that both were likely recorded by one of Bach’s pupils rather than the man himself, documents of an extraordinary improvisatory session in a keyboard lesson. Esfahani summoned an uncanny spontaneity, executing the vertiginous flourishes of the Prelude’s opening cascades with dizzying abandon (he is indeed famous for a harpsichord iteration of Steve Reich’s Piano Phase after all); the heavier moments of metallic density felt almost like prog rock, though thankfully much more austere.

In the Fugue in B minor Esfahani made Bach’s counterpoint communicate with the eloquence and clarity of speech. His approach to phrasing and line is highly rhetorical but never mannered or hyperbolic. Just as in good conversation, his words are weighed carefully, replies measured but incisive, exchanges suffused with energy and fun. Gigues were sharp-elbowed, even raucous, infusing 300 year old music with remarkable vitality; Esfahani delights in Bach’s rhythmic kinks and found unusual accents in the Gavotte of BWV 814.

The harpsichord works through an especially keen attack, but Esfahani summons from it a remarkable legato, meshing metrical and rhythmic clarity with a spinning cantabile that sits on the warm cushion of the instrument’s decay. This was particularly evident in the lyrical haze of the BWV 814’s Sarabande. In the slow movement of the C minor suite we saw an especially intense realisation of Esfahani’s approach, which depends on a highly plastic sense of rubato and freedom, lingering in the tension of cadences and modulations. This was particularly effective in the Allemandes that introduce each of the French Suites (barring BWV 815, where Esfahani supplied a prelude by one of Bach’s students). Pensive resolutions and gently unfurling modulations provided harmonic and architectural backlighting in music that felt as natural as breathing.