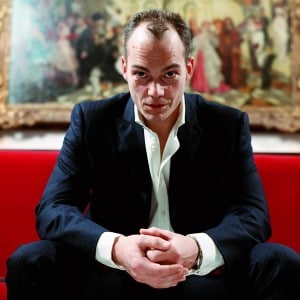 Exiled from his native land, his music branded “entartete” (degenerate) Hanns Eisler began his Hollywood Songbook not long after arriving in Los Angeles in 1942; six years later, the House Committee on Un-American Activities forced him to leave the country which he had come to call home, and he expressed his “bitterness and infuriation” at being “driven out” since it was one thing for the Nazis to expel him, but quite another for ‘the Land of the Free’ to have done so. The songs in this finely planned programme reflect the bitterness, isolation and loneliness of the exile, yet they also form a testament to the resilience of the human spirit.

There could be no finer evocation of this than the sublime ‘Ostersontag,’ where Brecht’s characteristically sparse lines describe how the writer had put aside a verse in which he’d been trying to expose the men who would soon lay waste ‘diese insel, mein Volk, meine Familie,’ – his son having dragged him out to protect a little apricot tree from the snow. In the midst of all his turmoil, the poet tells us that ‘Schweigend / Legten wir einen Sack / Über den frierenden Baum’ – ‘Silently we wrapped a sack round the shivering tree.’ Eisler’s music perfectly complements the words in its stark yet moving simplicity, and Christopher Maltman and Julius Drake performed it with restrained yet ardent phrasing.

Distance and alienation are recurring themes in these songs, and ‘Kalifornischer Herbst’ brings out the irony of living in a land of perpetual sunshine yet anticipating being ‘…gern im wieder befreiten Winter wohnen’ (…happy to live in our liberated winter.’) Maltman’s tone superbly evoked the paradox of the song, just as it suggested the grim despair as well as detachment of ‘Über den Selbstmord’ (On Suicide) with its mordant reflections on an ‘unerträgliche’ (unbearable) life culminating in an explosive fff appropriately on ‘fort’.

‘An den kleinen Radioapparat’ is typical of both Brecht’s sharpness of image and Eisler’s lovingly atmospheric music: Maltman’s ‘versprich mir, nicht auf einmal stumm zu sein!’ (promise at least you won’t go dead again!’) was more urgent yet perhaps less quietly moving in its subdued pleading than Matthias Goerne’s, in the latter’s 1998 recording with Eric Schneider. Drake’s suggestion of the heartbeat in the piano part was finely done.

An enthusiastic audience was rewarded with a movingly apposite encore, Schumann’s ‘In der Fremde,’ evoking the same mood of estrangement which makes the ‘songbook’ so deeply affecting. Eisler’s Hollywood Songbook was not heard in the composer’s lifetime, so in this 60th anniversary year of its completion, it was a special pleasure to experience it given so heartfelt a performance. As the composer himself said, “In a society that understands and loves such a songbook, life will be lived well and without danger.”