by Sam Smith
published: 2 May 2019 in Opera and Classical Reviews
Tweet 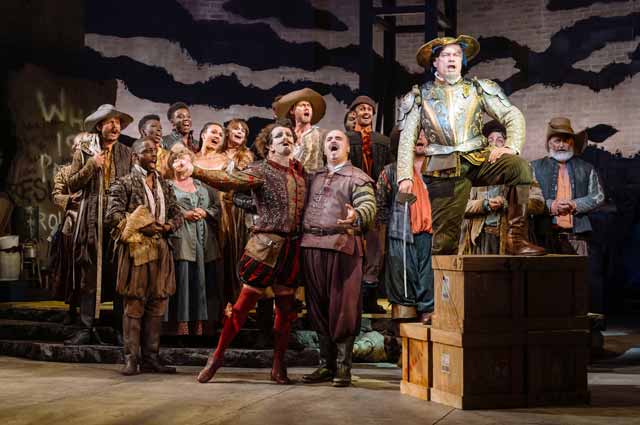 It is safe to say that Man of La Mancha is better known in America than Britain. The 1965 musical, with book by Dale Wasserman, lyrics by Joe Darion and music by Mitch Leigh, enjoyed an initial run of 2,328 performances on Broadway, won five Tony Awards including Best Musical, and was subsequently revived four times. Conversely, in Britain it enjoyed no major professional productions for fifty years after its first appearance in 1968. Now, however, following on from Sweeney Todd, Sunset Boulevard, Carousel and Chess, it comes to the London Coliseum to constitute, in collaboration with Michael Linnit and Michael Grade, English National Opera’s musical theatre offering for the year.

Wasserman always stressed that the creation was not simply a musical version of Don Quixote, as it tells a story within a story. Set in the late sixteenth century, it sees Miguel de Cervantes as a failed author-soldier-actor and tax collector thrown into a dungeon by the Spanish Inquisition, charged with foreclosing on a monastery. The other prisoners wish to take the possessions he has in his trunk and burn what turns out to be an incomplete manuscript, but they agree to put him on trial themselves so that if he is found innocent he may keep them. Things do not start well as a prisoner known as ‘The Duke’ charges him with being an idealist and a bad poet and he pleads guilty, but then another known as ‘The Governor’ allows him to offer a defence in the form of a play. The rest of the musical thus sees Cervantes, his manservant and all of the prisoners essentially acting out Don Quixote, although the work does not purport to be a faithful rendition of either Cervantes’ life or the novel. For example, the historical Cervantes had no contact with the Spanish Inquisition, and nor is Don Quixote’s horse Rocinante ever stolen in the book.

The difficulty with Lonny Price’s staging derives in part from a problem with the piece. It presents a show within a show so that whenever Cervantes plays Don Quixote, his manservant Sancho Panza or The Governor The Innkeeper, each is deliberately adopting a persona that essentially means they are telling us they are portraying a character. As a result, before we even begin there is an inbuilt barrier to us ever really believing in what we see before us, and hence to feeling anything for anyone in the drama. Things are not helped in this instance by us remaining so conscious of the prison setting throughout as a stage on which the fantasy plays out stands within its heavy walls, so that we are always cognisant of the prisoners surrounding and viewing the action. 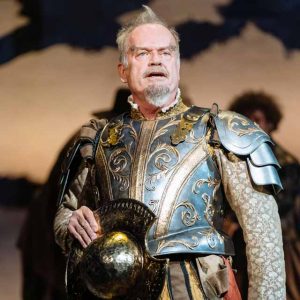 More could surely have been achieved with some imaginative scene changes that really thrust us into each scenario. As it is, it is only towards the very end of Act I when against an illuminated stage floor and stars gleaming overhead, we are encouraged to feel that we have been taken out of the prison setting altogether. In this respect, however, Act II does feel stronger, so that when halfway through it the dungeon’s huge staircase descends once more to take another prisoner away the renewed sense of its imposition reminds us of just how far removed we have become from this place of reality.

Unsurprisingly given their backgrounds, of the two leads Kelsey Grammer proves the better actor as Cervantes and Don Quixote, and Danielle de Niese the stronger singer as Aldonza and Dulcinea. In some ways, Grammer can get away with occasionally singing flat because his actual delivery of the words is engaging, but it is still hard to overlook his woeful breath control. De Niese’s acting style could be seen as intentional in the sense of someone deliberately portraying a character, but judged on both the singing and acting a more rounded performance arguably comes from Peter Polycarpou’s Sancho Panza and manservant, while Nicholas Lyndhurst proves good value as The Governor and Innkeeper.

The orchestra is well conducted by David White, while there are strong performances from the supporting cast so that some of the best moments come in songs that involve groups of them such as ‘We’re Only Thinking of Him’ and ‘Little Bird, Little Bird’. There is some good singing, acting and staging across the evening as a whole, but a show such as this needs to achieve everything perfectly within the style demanded of it, and at too many points too many things undermine the effectiveness and thus overall impact of what we see before us.