Winterreise is the last of Wigmore Hall’s live lunchtime recitals. Melanie Eskenazi will miss these performances. 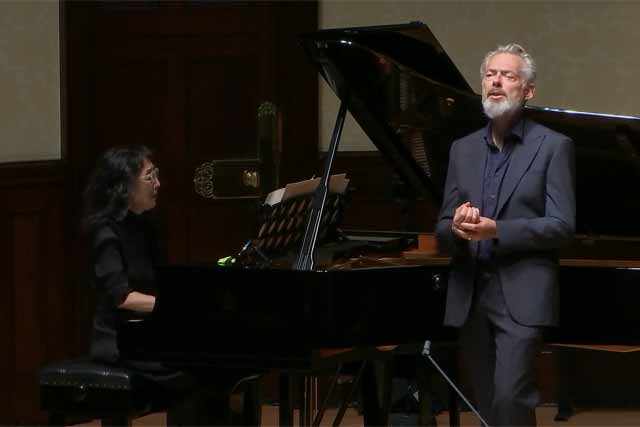 John Gilhooly, the Wigmore’s Director, made an impassioned speech just before this final concert of the Hall’s month-long series, reminding audiences of the importance of the arts for our national life. We can only hope it does not fall on deaf ears, although at present there is no official governmental help for culture – in contrast to other countries where vast sums have been earmarked. Not only is our arts industry a big earner for our economy but it is a major part of our ‘soft power,’ whose value is incalculable.

Perhaps a performance of Winterreise may not be the ideal platform for verifying the status of music as an art for everyone, given that it is one of the more esoteric works in the canon, but this recital certainly provided evidence of the exalted standard of our music making, and of how much ‘live’ performances of this calibre have been missed.

We commented on the excellence of current accompanists in a previous review, and here to crown them all was the great Dame Mitsuko Uchida, proving that a sublime soloist can make the finest of all collaborators. Her partnership with Mark Padmore is one of mutual respect and understanding, revealed in every phrase. Padmore regards Winterreise as an existential journey rather than a sentimental one, and both playing and singing delineated just such a progression. Watching Uchida mouthing the words as Padmore sang them was a special pleasure, one only possible for everyone in these close conditions. 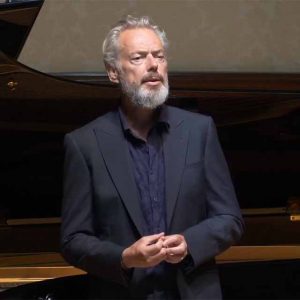 Padmore sang as if his life depended on it, his ever-plaintive tones sometimes a little strained but always giving heartfelt meaning to the lines and always scrupulously musical. The second song, ‘Die Wetterfahne’ provided the key to much of what followed – it’s hard to imagine the words ‘ihr kind is eine reiche Braut’ sung with a more potent mixture of fury and despair. ‘Gefrorne Tränen’ in contrast was sung with the utmost simplicity, the piano slightly less staccato than usual, and the pleading of the question in ‘Errsarrung’ was heartbreaking.

‘Der Lindenbaum’ was the only song of the first set which Schubert’s friends liked, almost certainly owing to its lilting rhythm, a rhythm which Uchida evoked with consummate skill and which Padmore used as a contrast to the despairing emotions being evoked. In ‘Rückblick’ the most perfect union was achieved in the lines ‘Wie anders hast du mich empfangen/ du Stadt der Unbeständigket!’

“Not only is our arts industry a big earner for our economy but it is a major part of our ‘soft power,’ whose value is incalculable”

‘Frühlingstraum’ offered perhaps a little more hope than one usually hears, with the questions carrying some doubt and the nachspiel conveying not so much bleak despair as a small note of possibility. The sense of movement from anger to a form of acceptance was finely shown in ‘Das Wirtshaus’ where Uchida played the introduction with reverence, emulating the trudging steps of the forlorn wanderer.

‘Mut!’ had a very strong sense of defiance, the piano seeming to back up the poet’s almost frenetic resolve, and for ‘Die Nebensonnen’ we returned to the sense of awe which permeates much of these songs. ‘Der Leiermann’ sensitively evoked the fragile existence of the old man, and seemed to suggest that these two – the barefoot musician and the forlorn lover – were made to accompany each other on the next stage of their journey.

This final recital crowned a brilliant series, in which hundreds of thousands of people have been able to experience the artistry of some of our finest musicians and gain at least a taste of the unique ambiance of the Wigmore Hall. If the hall is able to open up to ‘live’ audiences in September, it is to be hoped that at least some of the concerts can be broadcast ‘live’ so that this inspiration may continue.

• Past performances in this series can be viewed here: wigmore-hall.org.uk/watch-listen/live-stream