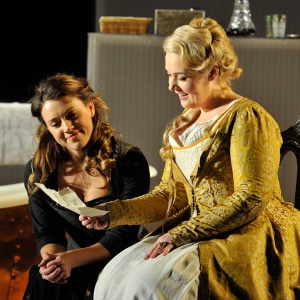 The first revival of Fiona Shaw’s production of The Marriage of Figaro for English National Opera features an almost entirely different cast to its initial outing, and yet the strength of the dynamic that in 2011 it seemed was generated by the intricacies of the individual performances feels entirely undiminished here.

Shaw decided that Figaro could not be set in the modern day, as would have been her natural preference, because the droit de seigneur is too alien a concept. She therefore decided to represent the Count’s house where the action takes place as a maze, within which people can physically and symbolically become lost. Courtesy of Peter McKintosh’s rotating set, we really feel as if activity occurs constantly throughout this aristocratic residence. In the first scene a man mops the corridor outside Susanna’s bedroom while another cleans his scythe and, looking like the grim reaper, hints at the troubles ahead. When Susanna and Marcellina trade insults in ‘Via, resti servita, madama brillante’ (though you won’t hear those words in Jeremy Sams’ exceptionally smooth and witty translation) they go on a tour of the house that sees them splatter the kitchen with flour. When Dr Bartolo and then Antonio wade into the action they are not forced to appear inappropriately in the bedroom, as can happen in productions that use a single set.

The concept, however, is not entirely without its problems. Shaw suggests that mazes were intrinsically eighteenth century, but in reality the net result of the stage being dominated by bleached white walls is that the action feels devoid of context. There are also times when all of the activity feels too distracting. The music tells us the emotion, the principals give the narrative sufficient drive, and so the further addition of actors scuttling through rotating sets can occasionally be too much. For example, in ‘Voi che sapete’ Cherubino keeps gesturing to Susanna and the Countess to turn their backs as he sings. With that pair moving around and Cherubino overtly revealing his embarrassment, the aria, sung well by Samantha Price, suffers from not being presented as an ethereal oasis in which the youth can for once open up and display his sensitive side.

Other moments work far better, and there is undoubtedly an exquisite attention to detail. Symbolically, the Count is the Minotaur at the centre of the maze who devours women, and so Figaro, as the Barber of Seville, puts his razor to a horned skull as an indication of what he would like to do. The music teacher Don Basilio is made blind, which has a nice impact on the scene where the Count and Cherubino end up hiding. The Count doesn’t really need to obscure himself at all, and when the latter is first discovered, Basilio continues singing entirely oblivious to the fact.

‘Non più andrai’ is especially effective as with every line Figaro sings the Count gloats and Cherubino trembles, with neither appreciating he has his own agenda that render both of their reactions ‘incorrect’. Similarly, the numerous trips, slips and falls that this production features are slickly managed, while the lower walls of Acts III and IV help to bring the set and production into check, making the second half feel more balanced. Particularly amusing is the scene in which Bartolo and Marcellina realise they are Figaro’s parents. Bartolo contributes to the wedding dowry with a single note while Marcellina does what every mother has done at one time or another, namely wipe her son’s face with spit on a hankie!

Jaime Martin’s conducting is excellent, but the evening is really made by the principals who, seemingly effortlessly, tap into what the opera is really about. First among equals are David Stout and Mary Bevan as Figaro and Susanna who through their clear and thoughtful interactions present a couple who genuinely love each other, and yet enjoy a standard domestic relationship in its earthiness as much as its bliss. With his strong baritone, Stout is a sturdy presence who takes the stage by storm with his mischievous ways. Bevan, who played Barbarina when the production premiered, reveals a vocal line of soaring sweetness and accuracy, as well as impeccable phrasing. Her gestures and facial expressions, even when she is silently hiding behind objects, suggest a bright character who is always thinking and calculating, but only ever with the most noble of intentions.

Even by the measure of most Counts Benedict Nelson presents a formidable and brutal figure whose presence you would not wish to be in when he went into a rage. In keeping with this, his other emotions seem equally large such as the fear and anxiety that he shows as he becomes increasingly thwarted and confused. Sarah-Jane Brandon as the Countess grows as the evening progresses, while amidst the smaller roles Lucy Schaufer as Marcellina and Ellie Laugharne as Barbarina stand out. As the latter sings ‘L’ho perduta, me meschina’ one senses we may be looking at another Susanna in the making.

Opening night, however, ultimately belonged to the Susanna of the moment and at the end of the performance Guy Dammann presented Mary Bevan with the 2014 Critics’ Circle Music Award for Exceptional Young Talent (Voice). He pointed out that the choice of Bevan required no further justification than the performance that had just been witnessed, and although critics may disagree on many things, it would have been hard to find anyone present dissenting from that view.

Eleanor Dennis plays the Countess and Toby Purser conducts on 19 and 23 November.

Read our interview with Mary Bevan.