The Mastersingers of Nuremberg @ Coliseum, London 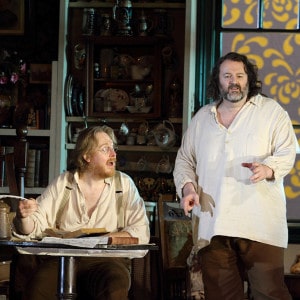 English National Opera needs a big hit on its hands, and this visually stunning, brilliantly played and sympathetically sung production should supply it. Originating at Welsh National Opera, where Bryn Terfel sang the role of Hans Sachs, it comes to the ENO for only eight performances and would be worth catching if only for the sublime orchestral playing under Edward Gardner and the unconventional Sachs of Iain Paterson.

This is Gardner’s last season as the ENO’s Music Director; he will bow out with The Queen of Spades in June/July, and he is clearly already in elegiac mode since his direction of the orchestra in this Mastersingers, although it rose magnificently to the grand theatrical moments, was chiefly remarkable for its lyrical, reflective sweetness and its poetic, tender phrasing. The hushed introduction to, and accompaniment of, the transcendent quintet, the strings forming a halo around Walther’s prize song and the passages around the various misunderstandings in Sachs’ home all represented orchestral performance that was as good as you’ll get anywhere.

Iain Paterson was already well on the way to becoming established as one of the present day’s great lyric baritones when we interviewed him as long ago as 2010, and he confirmed that expectation with a fine Amfortas in 2011. He was the logical choice for the ENO’s Sachs, although his voice is lighter than would be ideal to fill out both the vast space of the Coliseum and some of Wagner’s longer lines. He gives a convincing portrayal of a character who can often – let’s face it – give the Marschallin a run for her money when it comes to being lengthily tedious about the meaning of life. The slightly buffoonish characterization fitted well with the wayward, romantic, pensive nature of the poet, both monologues were engaging, and when he got out his crumpled hankie to wipe away a tear after the scene where he obliquely voices his feelings for Eva, you actually felt for him rather than thinking him a sap.

Gwyn Hughes Jones was equally credible as Walther, more of the peregrinating poet than the knight in shining armour, and his prize song was definitely a winner. Andrew Shore’s Beckmesser was his debut in the role onstage; unsurprisingly he allied fluent singing to subtle characterization. The American bass James Creswell was well cast as a self-important Pogner, and Nicky Spence’s role debut as David promised much. Rachel Nicholls certainly has the steely, penetrating vocal quality of a Rita Hunter but on this occasion her key moments were not quite as soaring as expected; her Eva will surely grow in tenderness as the run progresses.

Madeleine Shaw was an impressive Magdalene, more of a best friend than a matronly supervisor, and Nicholas Crawley made the most of his Nightwatchman. There were some great voices amongst the Masters, most notably Timothy Robinson’s Esslinger and David Stout’s Kothner, but none of them had been especially well characterized as individuals, with the exception of Roderick Earle’s Folz.

Richard Jones’ production is big, bright and beautiful, and makes exceptionally astute use of the Coliseum’s vast stage; it is virtually laugh-free unless you count the odd chuckle at Beckmesser or the doddery Master, and it does a very good job of neutralizing all that dubious guff about holy German art. Those raised (as I was) on Scottish Opera’s iconic production with its bittersweet balance between tear-inducing hilariousness and lump-in-the-throat, no-holds-barred worship at the shrine of ‘Heil’ge Kunst’ will find this one interesting rather than life-enhancing.

The chorus was absolutely superb, especially in ‘Wachet Auf’ which had most of those sitting in the stalls pinned back in their seats in astonishment and delight at the thunderous yet still crystal clear sound. I found the costumes and settings stunning yet puzzling: the ‘volk’ wore quasi-16th century dress, the Masters cloaks of the period yet also sported black or grey frock coats, Eva the one sprigged dress throughout (her golden wedding shoes notwithstanding). Sachs’ lovingly realized intellectual’s study / drawing room was as naturalistic as the patterned elderflowers and exterior walls were stylized, and all those portable booths, whilst undeniably striking, did not add a great deal.

The frontcloth, with its array of notable faces apparently chosen because they were, with a few exceptions, all born in Germany (?) and were all ‘original’ artists, might serve to remind us that ‘German’ Art has indeed survived to the present day. However, given that Sachs sings of honouring our ‘noble’ rather than ‘German’ masters, perhaps a better message would be that we should continue to celebrate all great artists, no matter what their nationality or birthplace.