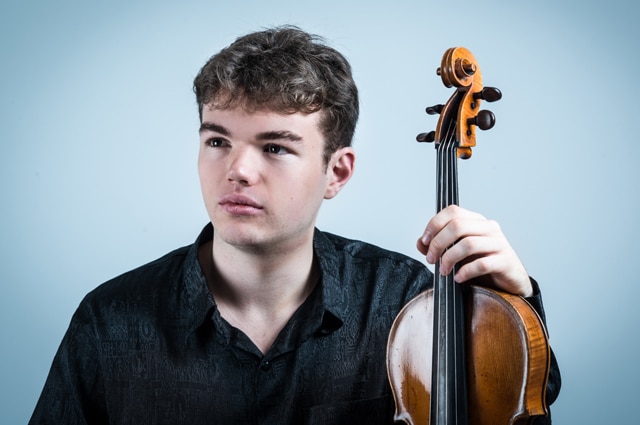 While the BBC Symphony Orchestra was giving the UK premiere of a new work by Anna Clyne at the Barbican Hall, a stone’s throw away at the Milton Court concert hall the fledgling Melos Sinfonia topped that with the world premiere of a piece by young composer Desmond Clarke.

If Clarke and the Melos Sinfonia are unfamiliar names, that is because of their youth. Established in 2010, the Sinfonia is made up of students and recent graduates from universities and conservatoires across the UK, and includes members of several other youth orchestras. Clarke, meanwhile, is a 26-year-old York-based composer who wrote his short viola concerto, Void-Song specifically for the Melos Sinfonia and soloist Timothy Ridout.

Speaking from the stage, Clarke explained that his single-movement work was based on simple pulses and “stochastically generated fields of events”, i.e. random and unpredictable patterns, rather in the manner of Iannis Xenakis. Thankfully, the concerto turned out to be an approachable and attractive work. There was a genuine balance between the solo viola part and the string-dominated orchestra, with moments of considerable lyricism and virtuosity from both. Ridout handled his part with confidence and flair, and the orchestra coped well with some of the more unusual writing, which included frenetic pizzicato passages and whistling sounds from the woodwind section.

The concert opened with Mendelssohn’s Hebrides Overture – a work so familiar that it can be difficult to know what to do with it. But under the Melos’conductor, artistic director and founder Oliver Zeffman (aged just 22), the orchestra delivered a crisp, clear and rhythmically energetic performance. With more players, the strings might have been warmer in tone, but Zeffman’s direction of the woodwind and brass brought out the often-overlooked originality of Mendelssohn’s scoring.

Schoenberg’s Chamber Symphony No. 1 is a more difficult work to bring off successfully, and here the Melos Sinfonia didn’t quite make it. There was some fine playing by the 15 instrumentalists, particularly among the woodwind, but the unity of the ensemble sometimes went astray, and in a couple of movements the balance between the varying forces occasionally faltered.

Haydn’s Symphony No. 88, which ended the concert, was much more straightforward. Given its perky optimism, the Melos Sinfonia might have given it more of a light-hearted touch, but what they lacked in humour they made up for in spirit and energy. The slow movement variations were delicately realised, while the third movement’s minuet and trio chugged along merrily enough. More speed could have been injected into the finale, although conductor and orchestra resisted the temptation to rush through it.