by Yangen Xu
published: 20 May 2006 in Opera and Classical Reviews
Tweet 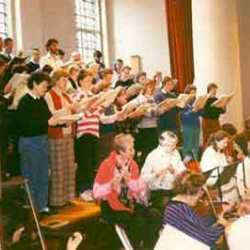 Written for the UK’s very own Birmingham Festival, Mendelssohn’s Elijah is one of the most popular oratorios today.

However, as with all performances of music, the eternal question is: does the performance of such a monumental work do justice to the music?

Conductor James Gaddarn, who reminds me of Igor Stravinsky in terms of physical presence and intensity, is probably the man to credit for the standards of the combined forces of the London Orpheus Choir and the Ealing Choral Society.

Slightly hunched over, and without any overly-dramatic conducting gestures, Gaddarn was a genius in bringing out dynamic changes from the choir, especially in the opening chorus, ‘Help Lord! Wilt Thou quite destroy us’.

In terms of chemistry with the soloists, the choir did very well indeed. The scene where Elijah taunted the priests of Baal (and killed them afterwards) was very convincing, and probably the highlight of the evening. The furious choir screaming for Baal to answer them, and the calm Elijah who did not worry at all, left a very powerful impression on the audience indeed.

Had the London Orpheus Orchestra followed Gaddarn’s instructions all the time, the performance would have been much better. While sitting in the audience, I got the distinct feeling that the high woodwinds and upper violins were not paying attention to the conductor at all, and Gaddarn’s intended tempo changes were not carried out. That said, the orchestra tends to do better in louder choruses – and despite all that I may say about them, the Overture was quite compact and well-performed.

In comparison with the orchestra, the soloists for the evening were certainly much better and stronger. Soprano Linda Perillo gave a powerful performance, especially in the opening of Part Two, ‘Hear ye, Israel, hear what the Lord speaketh’. Her ability to control her higher notes and wonderful phrasing is certainly very impressive, although personally I feel that she was rather brash through the less exciting moments in her singing. But she certainly did the climaxes very well.

On the other hand, contralto Catherine Denley was a person of fine gestures. She brought out the little intricacies in the text and made a distinct effort to use different colours when portraying different characters. Her projection, however, was not very strong, and half the time I was straining to hear her – although her Air, ‘Woe, unto them who forsake Him’, was really a joy to behold, in the way she controlled her vibrato and portamento.

Tenor Michael Hart-Davis, who has one of the most gentle upper registers I have heard, also suffers from a lack of projection power. I think he will do wonderfully in a few years when his voice matures. He did bring out the contrasts between the Obadiah who told Elijah to flee (‘Man of God, now let my words be precious’) and the man who pointed out the depressed Elijah (‘See, now he sleepeth beneath a juniper tree’). In all, it was a convincing performance except for his lack of performance power.

Eleven year old performer Dominic Tighe, who sang as the boy Elijah sent to look for rain, should certainly be applauded for his brave attempt. His notes were very clear, and his projection was quite intense, although his intonation was rather shaky. Some of the fault was due to the out-of-tune wind instruments that double his voice part. Still, I think the world has a future star in this little boy.

Ian Caddy, who sang Elijah, was undisputedly the man of the night. His impressive projection and vibrato, and his ability with long phrases, was wonderful, and even though his face did not show it, he certainly portrayed the different emotions of Elijah very well. From the Elijah who declares God’s coming wrath (‘As God, the Lord of Israel liveth’), to the Elijah who taunted the priests of Baal (‘Call him louder! He heareth not’), to the torn and worn and heart-breaking Elijah (‘It is enough! O Lord now take away my life’), Caddy’s singing ability certainly made it all very convincing. He did falter a little in the middle of Part II, probably due to fatigue, but that did not take the gloss off a wonderful portrayal of Elijah.

In all, a considerably good performance. Concert lovers will have something to look forward to when the London Orpheus Choir takes on Bach’s B minor Mass at St John’s Smith Square on 26th Nov 2006.