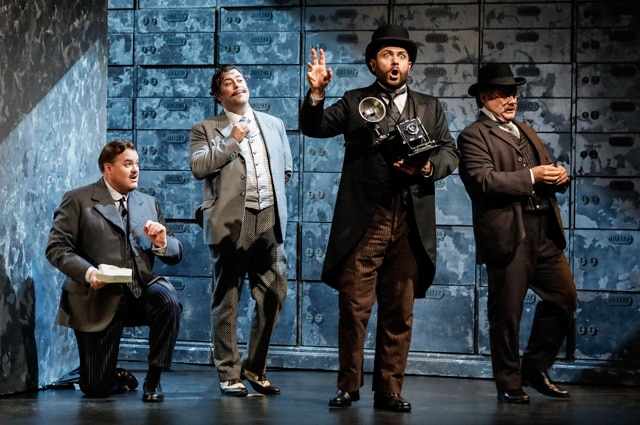 André Tchaikowsky’s sole opera The Merchant of Venice was written in the years just before his death in 1982. He offered it to English National Opera where it was considered to the extent of receiving a play through of Acts I and II in 1981 before being rejected by Lord Harewood. The composer’s dying wish that his opera be performed was finally fulfilled in 2013 when David Pountney commissioned Keith Warner to direct a production at the Bregenz Festival. In 1981 Pountney was artistic director of ENO and he commented after its premiere that Tchaikowsky’s ‘operatic view of Shakespeare was something to be treasured, but in the end it met with silence. I was part of that silence. Now I am part of the noise’. The same production was then staged by Welsh National Opera last September, and the company now bring it to the Royal Opera House.

The opera follows Shakespeare’s play quite closely, with John O’Brien’s English libretto using many of the original lines. Born in Poland in 1935 Tchaikowsky spent time in, and was smuggled out of, the Warsaw Ghetto leading Pountney to comment that ‘It is a riveting thought that a survivor of the Warsaw Ghetto chose to spend his last years composing an opera based on a Shakespeare play in which we are never quite sure if hatred of the Jews is being condoned or condemned’. In line with this, however, it is clear that the composer does make Shylock a multifaceted character for whom we feel a great deal of sympathy.

In truth, Shakespeare made the character three-dimensional to begin with, but Tchaikowsky employs a wide range of tools to bring out certain points. For example, when Shylock declares ‘I hate him for he is a Christian’ it is with an exaggerated voice that suggests these are not his true thoughts. Rather, he is displaying a defiance of sorts by deliberately playing up to the stereotype of how the Christians perceive him. Similarly, while the chorus does not feature much it is still used very effectively, revealing an entire society railing against the ‘outcast’. The ‘freeing’ of Jessica seems like the kidnapping of Gilda in Rigoletto as it involves the entire community. In this production, many of the crowd are dressed in religious robes as might be seen in Venice but, although these are black, the pointed hoods still bring to mind the Klu Klux Klan or Spanish Inquisition. Nazi storm troopers are also among their number, which makes the event seem akin to a pogrom.

Warner sets the action broadly in the twentieth century (there are typewriters but not modern gadgets), and each of the opera’s four scenes enjoys a different set, with not all of these remaining static. For example, in Act I the main structure, courtesy of Ashley Martin-Davis, consists of two long walls lined from top to bottom with tiny drawers. When Bassanio sees Shylock to ask for money these are placed opposite each other so that they run from the front to the back of the stage. Behind them at right angles are blackboards upon which different numbers are constantly chalked up, thus providing a halfway house between an old-style and a modern stock exchange (where everything is computerised). These walls are then spun around to reveal the interior of Shylock’s house, which is deliberately made to look like a prison. 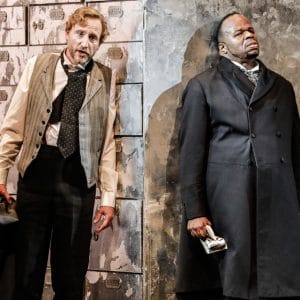 It is not clear what notes Tchaikowsky left concerning his own vision for the staging. However, it certainly seems as if Warner spent much time working out what directions would both fit the music and bring out the necessary points. For example, the two scenes in which the Princes of Morocco and Aragon each play the caskets game to try to win Portia are here combined into one. With both roles being danced rather than sung, Tchaikowsky writes a reasonably lengthy ‘routine’ in which they both make their choices, thus requiring any director to work out how to utilise it. Warner sets the three caskets in large upright safes within a maze, which enables him and choreographer Michael Barry to work to the length of the music by having Aragon bumbling around as he gets lost in it, and the extravagant Morocco exploding open his chosen safe and then committing suicide on discovering that he has found a skull rather than Portia’s image.

There are a host of thoughtful touches so that in the Epilogue the three safes are overturned to contain water, fire and earth respectively, with a moon on the backdrop representing the fourth element of air. Both the opera and the production draw strong parallels between Antonio and Shylock, suggesting that they are kindred spirits who are destined to lead solitary lives while everyone else goes off to celebrate at the end. Theatre, by occupying an audience for just a few hours, tends to focus on key moments in the protagonists’ lives, but here we gain a strong sense in which this loneliness will be a permanent state of affairs for both of them as they live into old age. We are also reminded that the Prince of Aragon, a figure who it is all too easy to dismiss as merely a minor character in the story, is left in the same boat as them, having to lead a life of celibacy because he failed to win Portia.

Tchaikowsky’s music does not always feel instantly accessible, but it is highly intriguing. With it being composed between 1968 and 1982, it does seem to sit in a world between Britten and Birtwistle, and remains hard to ascribe to any one specific twentieth century style as it draws on such a wide range of influences. There are indeed nods to a vast range of composers in the score so that, for example, when Portia gives Bassanio a ring, the appropriate leitmotif from Der Ring des Nibelungen is played.

Lionel Friend conducts sympathetically while the cast, which includes Marc Le Brocq as Bassanio, Sarah Castle as Portia, Verena Gunz as Nerissa, Lauren Michelle as Jessica, Bruce Sledge as Lorenzo and Miklós Sebestyén as the Duke of Venice, is generally strong. Baritone David Stout is a suitably boisterous Gratiano, and if on hearing Martin Wölfel’s countertenor it would seem that he is not used to having to fill areas as large as the Royal Opera House, his sound remains pleasing and he imbues Antonio with exactly the right sense of isolated melancholy. The highest accolades, however, go to Lester Lynch as Shylock who reveals an extremely human fragility as he is insulted on the street and loses his daughter. His excellent baritone and assertiveness in the court scene make him an extremely powerful presence, but even here we are able to view his ‘malevolence’ within the context of one who has been so ill-treated by society, which if anything has only made his religion even more important to him.

The Bregenz production from 2013 is available on DVD on the Unitel Classica label.