A brilliant transcontinental mosaic of Handel’s great work from the London Handel Festival. 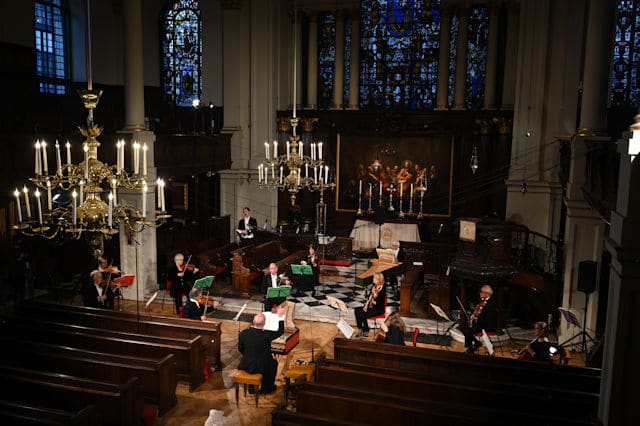 The instruction for the trumpets on ‘Glory to God’ in Messiah is da lontano (from a distance), and never was this more apt on Monday evening for the London Handel Festival’s production of Messiah Reimagined. A minimal string orchestra and keyboard continuo (London Handel Orchestra under the direction of Laurence Cummings) played live in St George’s, Hanover Square, the winds and timps were recorded on a backing track, and the chorus was supplied pre-recorded from Canada by members of The University Chamber Choir, Toronto.

And thus it was with the entire performance – an inspired solution that made a virtue out of a pandemic necessity – the entire oratorio with the soloists (Lucy Crowe, Iestyn Davies, Nathan Vale and Edward Grint) singing live from St George’s, and the choruses supplied pre-recorded from groups in the UK, Canada, the USA and Germany, and the specially gathered ‘Sing at Home Chorus’ from all over the world, either singing safely together, or recorded individually at home and edited.

The soloists gave some fine accounts. Grint’s authoritative bass-baritone delivered a brisk ‘The people that walked’, some splendid percussive attacks in ‘Why do the nations?’ and a solidly sounding trumpet (joined live by the peerless David Blackadder). Nathan Vale’s lyric tenor worked well for the gentler arias (‘Comfort ye’ and ‘Behold and see’) but it lacked a little of the Helden heft that weaponizes ‘Thou shalt break them’. Davies and Crowe were clearly on a decorating spree, and produced some glorious ornamentations in their da capos. Davies delivered exactly the right contrasts between legato and agitato in ‘But who may abide’ and ‘He was despised’ and Crowe’s voice has that perfect blend of sweetness and cream to bring out both the irrepressible joy of ‘Rejoice greatly’ and the meditative beauty of ‘I know that my Redeemer liveth’.

The orchestra, despite small numbers, produced a fulsome sound, and, under Cummings’ sure direction, delivered not only some dramatically illustrative tempi – ‘Pifa’ was a brief hurdy-gurdy-accompanied dance – but some clever commentary via the continuo work (the kitten-on-the-keys for ‘the lame man leaps as an hart’, or the exuberant whooshes in ‘Rejoice’). 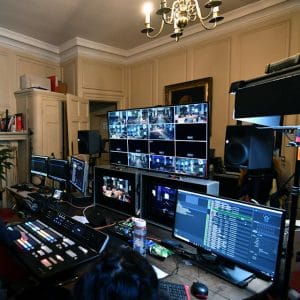 Messiah Reimagined: Bringing it all together (Photo: Christopher Christodoulou)

But it was the variety of choral work that really made this a stand-out performance. Because of the exigencies of pre-recording, consistency (other than via the tempo of the backing tracks) was not at a premium; but that was the whole point: to create an international community response to the pandemic through music. And through careful allocation of choirs to choruses, some enchanting timbral variety was achieved.

The young upper voices of Guildhall School Junior Department Chamber Choir imparted a spring-freshness to ‘Lift up your heads’; Scunthorpe and District Choral Society and Scunthorpe Cooperative Junior Choir provided some solid attack for ‘Surely’; the staccato ‘…prince of peace’ from the Good Shepherd Choir (Austin) was inspired; ‘Let us break their bonds’ from the Ottawa Bach Choir was notable for its precise and vengeful fugal entries; the slow-up for ‘and the Lord hath laid on him’ (‘All we like sheep’) from The National Youth Choir of Great Britain was deftly handled, and the contrasting of St George’s own choir and the German NDR Choir in ‘Since by man’ was clever. Praise must go to the engineers who ensured the slick transitions (and some magnificent attacas for ‘And he shall purify’ and ‘Glory to God’).

Above all, what shone out was the community feel that an online performance engendered. As one listener remarked in You-Tube’s busily scrolling, multi-national chat facility: “How unusual but how lovely to be able to talk during a performance”.

The performance is available for some weeks on YouTube.