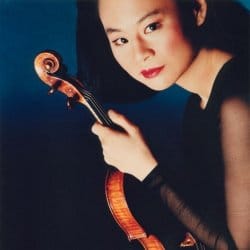 There are times when one’s linguistic abilities are completely inadequate to describe one’s feelings after hearing a perfect concert.

Midori’s recital at the Barbican Hall was one of those times.

The evening’s programme started with Schubert’s Violin Sonata in D, D384, which is one of the composer’s very early works.

In the hands of Midori and pianist Robert McDonald however, the inadequacies of the young Schubert were not enough to mar this ideal performance.

Midori’s excellent technique and virtuosity ensured the youth of Schubert was portrayed in full, and her passionate romanticism was just right for the slow movement.

Prokofiev’s Violin Sonata No 1 in F minor followed. A work of immense fire, passion, and energy, neither performer failed to impress. In most places, the chemistry between violinist and pianist was wondrous to behold, and those little nuances – the slight slowing down, the tiny bit of extra vibrato quiver (especially in the poignant slow movement) – were just perfect, truly distinguishing both performers as legendary from the world-class.

Accompanist Robert McDonald tends to drift into his own soloistic musical world from time to time. Midori, however, was always with the pianist, and while her physical playing style (she moves the violin with the music) may seem unusual, it gave her the impression of a larger-than-life performer, almost as if she were dancing on stage and the Guarnerius del Gesu that she plays were a natural extension of her.

Following such an immense performance before the interval, I expected the second half to at least show a drop in form. How I was wrong.

Schoenberg’s Phantasy is one work that demands impeccable blending between violin and piano, and impeccable the performance was. Midori seems to know exactly how much bow pressure, vibrato, attack, and tension to use on every single note, and pianist McDonald’s whole spectrum of tone colour and touch ensured no two notes sounded the same. While the performance was a little too introverted for my personal preference, it demonstrated to the audience the aspect of Schoenberg the music scholar, who demanded the most of his performers.

Beethoven’s Seventh Violin Sonata in C minor Op. 30/2 was the last work on the programme, and truly I admit, I have never heard the sonata played so excitingly well in my entire life, with both players taking over lines from each other so smoothly it was almost as if the entire work was played by one person. Judging by Midori’s petite size, one would not have expected her to produce the powerful tone she did when attacking the Beethoven, but her powerful playing, especially in the last movement, was so delicious the audience sat still lapping every single note. Pianist McDonald was also equal to the task, his fiery and powerful (albeit too masculine for my liking) tone dictated the vertical direction of the music, and the performance was truly perfect.

For the encore, we were treated to Karl Engel’s Sea Shell, arranged for violin and piano by Efrem Zimbalist. As before, it was poignant, and threatened to tear my soul out from my body. As a testament to the recital’s excellence, more than half the hall was standing up and clapping at the end of the performance. It is my opinion that if we heard the music of angels, it would probably sound something like that. Now all that’s left is to persuade somebody to fund my trip to Austria on May 31st where Midori will play the Beethoven Violin Concerto.