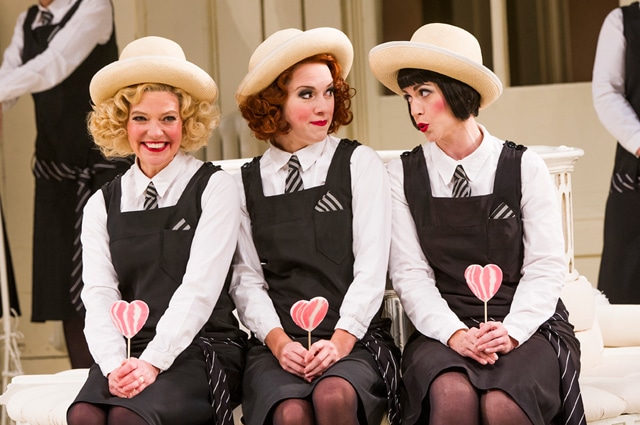 The brass may have crashed, and the trumpets may have brayed, but did Jonathan Miller’s 30 year-old-staging of The Mikado cut much of a dash on its 14th revival? Well yes, and no. Things didn’t bode well to begin with musically, as conductor Fergus Macleod made heavy weather of the overture, and took a while to settle; coordination between stage and pit often went awry whilst ‘Here’s a how-de-do’ almost derailed as soon as it began. Indeed throughout what seemed like a very long evening it felt as though we were at a final rehearsal as opposed to the first night. Those punters with tickets for later in the run are probably in for a better night in the company of one of G&S’ most potent concoctions than we were at this, its first outing.

We say first, but this run will see Miller’s venerable staging in the late Stefano Lazaridis’ designs clock up its 200th performance. It’s hard to imagine any of ENO’s recent shows even getting into double figures given many of them aren’t worthy of a revival, but at least with this Mikado, the company must be laughing all the way to the bank.

It has to be said however that laughter wasn’t in great supply at this performance. Of course Ko-Ko’s updated ‘Little List’ elicited the usual guffaws with references to VW emissions, Sepp Blatter and Cameron’s dead pig, but elsewhere we found ourselves watching with pursed lips, willing the performance to send us into spasms of delirious laughter, but alas it was not to be. Maybe familiarity really does breed contempt, and having seen Miller’s show roughly ten times in the last twenty-five years, maybe that’s enough? 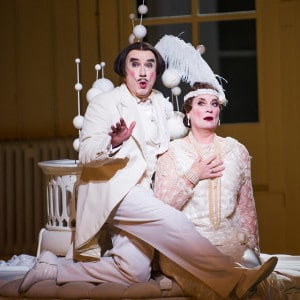 Any shortfall in the hilarity stakes was more than compensated for by the singing and without an American in sight, this truly was a company ensemble firing on all cylinders. If the old hands had the upper hand over their younger colleagues, then so be it. In their respective roles of Ko-Ko, Katisha and the Mikado Richard Suart, Yvonne Howard and Robert Lloyd gave exemplary performances that lifted the evening to an exalted level, whilst Mary Bevan and Anthony Gregory made a wonderfully alert pair of young lovers. True, Gregory would have benefitted from more vocal heft at times but his interpretation was winningly charming. With solid support from Graeme Danby as a supercilious Pooh-Bah and George Humphreys as Pish-Tush there were vocal delights aplenty.

Miller took a curtain call and was awarded with a well-deserved thunderous ovation. If rumours are to be believed we’ll have more cause for rejoicing when the company brings back one of his most admired stagings that Berry replaced with a dire one. Now about his staging of La Boheme…