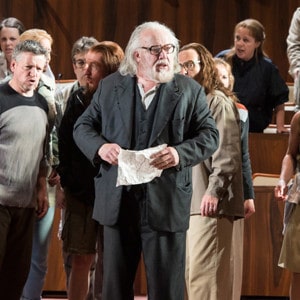 Full stagings of Schoenberg’s Moses und Aron are rare, and this visiting production by Welsh National Opera was the first opportunity to see the work in London since the revival in 1966 of the Royal Opera’s inaugural production from the previous year. The result was, encouragingly, a sold out performance of what is normally regarded as a difficult work for both performers and audience alike.

Schoenberg’s libretto, based on the Book of Exodus and originally conceived as an oratorio, provides an exploration of a number of philosophical themes, including the unknowability of God, the challenges faced by a prophet, and the conflict between idea and image, the latter personified by the respective figures of Moses and Aron. Acts I and II were scored between 1930 and 1932, making full use of the twelve-tone serial system Schoenberg had  formulated in the previous decade. The lack of immediately identifiable melodic and harmonic signposts inevitably puts the opera out of bounds for many listeners, but Schoenberg’s score conveys drama, fervour, spirituality and beauty for those willing to enter its musical realm.

Schoenberg often stated his intention to complete Moses und Aron, but left the brief Act III incomplete on his death in 1951. Fortunately, the first two acts provide an effective dramatic and musical experience in their own right. Although a completion of Act III was made in 2009 by Zoltán Kocsis, the opera is usually performed in its two act form, as it was in this WNO production.

Rarity does not automatically equate to quality, however, and the weak point of this presentation was the use of the 2003 production by Stuttgart Opera. The main set consists of a debating chamber with lecterns and desks at the front and gently raked seating ascending towards the rear, with a large window at the back. The set rather hems in the Israelites on their initial appearance in Act I, but the main problem occurs during Act II, where the same set is transformed into a cinema for the scene with the Golden Calf. We are left to imagine what the crowd are watching. Perhaps it was felt that Schoenberg’s music alone would be sufficient to move the narrative forward, but the result is a dramatic hiatus that is relieved only by a belated and, in the gloom, rather lacklustre depiction of the debauchery and destruction described in the libretto. What’s more, the indistinct modern dress given to the Israelites does little to elucidate the identities of the characters with singing roles.

Compensation was provided by John Tomlinson’s magisterial Moses, performing with unflagging heft and authority the Sprechgesang vocal writing given to the character. The vocal wear I’ve previously heard in Tomlinson’s voice was less apparent on this occasion. Opposite him was the German tenor Rainer Trost, bringing radiance to Aron’s bel canto sermonising, if sometimes overshadowed by Tomlinson’s sheer vocal power during the passages with overlapping vocal lines.

Other than Moses and Aron, the opera’s other main protagonist is the chorus, which has multipart writing of fiendish difficulty to deliver throughout. For the most part, the WNO Chorus coped with the challenge admirably well, although the singing occasionally tended towards loudness rather than fervour in climactic passages. By contrast, the quieter lines were delivered with refinement and an appropriate sense of awe. The opera’s various minor roles were all strongly sung by the WNO cast. Music Director Lothar Koenigs and the WNO Orchestra delivered a performance of refinement and commitment, if not quite banishing memories of Boulez in this work.