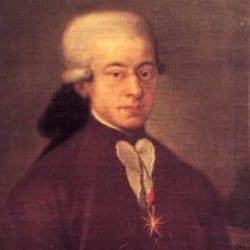 The London Mozart players really saved the best till last.

The final concert in their Mozart Birthday Weekend, celebrating 250 years since the composer’s death, showed off four of his best pieces of music.

And in the case of the piano concerto, the music-making was some of the most exciting I have heard in a long time.

The Serenade No 6 in D major, K239, subtitled Serenata Notturna, is a delicious little piece scored for string orchestra and timpani, plus five string soloists. The LMP’s leader David Juritz directed it from the violin rather than using a conductor – Mozart would have done the same, having written it for the Salzburg orchestra of which he was leader. The resultant ensemble values were excellent.

Opening the piece is a pompous march, whose most amusing moment is when the strings play soft pizzicato notes over smouldering rolls from the timpani, a really gripping moment here. The Minuet’s theme has a dotted appoggiatura melody that the LMP gave a jagged edge to, and the soloists impressed in the thin textures of the Trio. Closing the work was the charming Rondo, the most exciting moment being when the soloists played pizzicato over a low, smooth theme from the other strings.

Next up was the best performance of the Piano Concerto No 21, K467, I have ever heard. It exceeded even the ecstatic memory of the first concert I ever attended, when Moura Lympany played the piece at the (now closed) Free Trade Hall in Manchester.

The pianist was Howard Shelley, who also directed the orchestra from the keyboard. He explained the presence of a sound reflector on the grand piano, which allowed him to play with the delicacy of a period fortepiano and still be heard clearly, an ingenious solution to a puzzling performance practice issue, and it really worked.

The first movement was noteworthy for the amount of detail Shelley brought out of the orchestra, for instance in bringing bassoon and horn parts to the fore where these are often considered to be uninteresting bass instruments. His own playing was astoundingly virtuosic, gliding over the keys in scale passages and refusing to over-romanticise the heavenly second movement, which came over as more beautifully complex as a result.

The final movement was so mesmerising that I couldn’t write anything down. The tempo was energetic to say the least, but well within the grasp of these expert players. And orchestral detail was never lost, with the oboe/piano dialogue of the F major section coming across as comically as it should, for instance. The whole thing was spellbinding; Shelley should be engaged to perform the whole canon of Mozart concerti with the orchestra as soon as possible.

Not to be outdone, Sir James Galway opened the second half by directing the second Flute Concerto, K314, from the flute. Again, the results were astounding, the orchestra never losing stamina for a second. Mozart despised the flute, surprisingly, and the concerto was originally written for the oboe. Yet the music seems incredibly idiomatic for the flute, and in Galway’s hands one could not fail to feel satisfied. He brought out the cheekiness of the Allegro aperto; conquered the long soaring melodies in the Andante; and wowed the crowd with an amazingly fast set of repeated chromatic notes in the Finale.

The LMP’s Principal Conductor, Andrew Parrott, only appeared for the last work of the night, but he gave it his all. The C major Jupiter Symphony, K551, is orchestral champagne, and a fitting end to the weekend. It is Mozart’s last symphony, and he never heard it played because he couldn’t get it performed during the last three years of his life. The whole thing is wondrous, and received a stupendous performance on this occasion, full of vitality.

But the final movement is mind-blowing, reaching an unsurpassable apex in the coda when all the themes are combined with various methods such as canon. This requires a baroque-like precision from the orchestra, many of whose players have to play syncopated or clashing solo lines. The LMP gave it a barnstorming finish, a fittingly thrilling climax to a captivating weekend of celebration for Mozart’s 250th birthday.