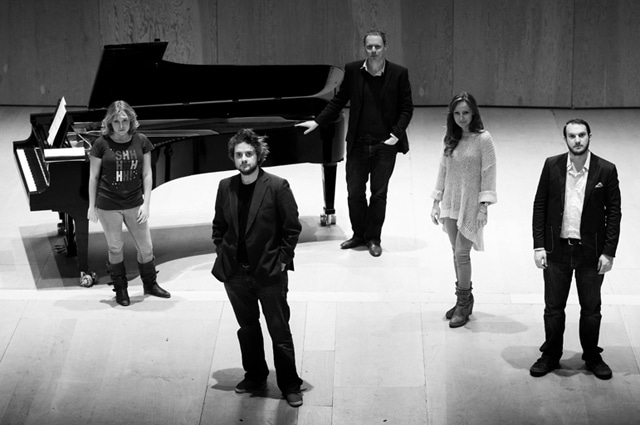 Losing one voice, due to illness, from an ensemble of four just before a concert is unfortunate, but, luckily for the Myrthen Ensemble, the tenor Nicky Spence was available to step into Allan Clayton’s shoes for Sunday night’s song recital at The Wigmore Hall. Notwithstanding the stresses undoubtedly caused by the change in line-up, the three remaining young singers gave a creditable, if slightly patchy, performance, and Spence himself excelled in his solo items.

The first half of the night-themed concert, ‘Songs to the Moon’, consisted of Lieder (as solos, duets and quartets) by Brahms and Schumann – which contrasted with a more solo-heavy French-dominated second half that also made room for songs by Peter Warlock, Elizabeth Maconchy, Samuel Barber and Federico Mompou.

It was an enjoyable evening of song, and, even within the seemingly quiet nocturne focus of the theme, there was room for contrast – Massenet’s exquisitely delicate duet for mezzo and baritone, Rêvons, c’est l’heure, and Schumann’s ethereally floated soprano-solo Mondnacht, for example, stood in antithesis to Maconchy’s edgy Sun, Moon and Stars for soprano, Duparc’s restless duet La fuite, or Brahms’ gothic Walpurgisnacht.

The singers acquitted themselves reasonably well – the soprano, Mary Bevan, has an attractive voice that is capable of interesting variety, as she demonstrated in the alternating fractured and lush passages of Debussy’s Apparition. Nicky Spence is a well-known quantity, and his mellifluous lyricism was demonstrated to the full in Joseph Szulc’s sensuous setting of Verlaine’s well-used poem Claire de Lune; his duet with the baritone Marcus Farnsworth – Fauré’s Pleurs d’or – showcased a well-matched pair of voices. Farnsworth himself was perhaps the best of the singers; he is comfortable with the baritone register, producing a rounded tone, as demonstrated in Schumann’s two Venetianisches Lieder or Saint-Saëns’ atmospherically Spanish Guitares et mandolines, but he has a strong bass register, holding his own in the quartet work – Brahms’ Der Gang zum Liebchen and Nächtens. The mezzo Clara Mouriz displayed the most variable vocal quality; her lower register in songs such as Brahms’ Ständchen was deliciously creamy, and she demonstrated some powerful top notes in her duets with Mary Bevan. However her middle range was variable – although she produced some delightfully restrained passages in Hahn’s L’heure exquise, she was also inclined to be a little reedy.

Alas, though, the solos – all clearly well within each singer’s repertoire – had much more soul in them than the ensemble work, and the difference was audible. Most of the solos were sung without music, allowing the singers to add physical drama to their performances, but in the duets and quartets, the need to hold music got in the way, and it seemed that rehearsal had not been sufficient to allow comfortable musical conversations (even between regular members of the group); these numbers were competently performed, and the blend of voices (particularly in the quartets) was fine, but the ensemble work left the listener wondering slightly what the group had special to offer, as opposed to four people who could each perform excellent solos. There were some lovely duets – Schumann’s Unterm Fenster, for example, involved some noticeable connection between tenor and soprano, but Fauré’s Tarantelle felt rushed and far too much in-copy; on the whole, more sense of ‘the Myrthen Ensemble’ was needed.

Undoubtedly the star of the evening, though, was the pianist, Joseph Middleton with his sensitivity to the voices and ability to summon up the mood of each piece through deft use of speed, dynamic and colour.

The Myrthen Ensemble MP3s or CDs

The Myrthen Ensemble on Spotify