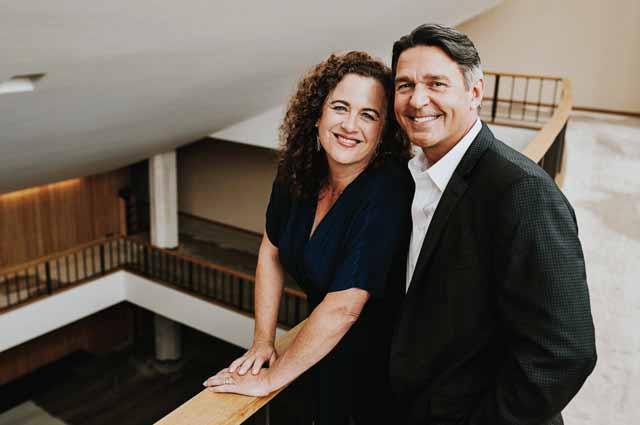 If there’s such a thing as a perfect programme of listening for a Sunday evening – music that’s comforting, mostly undemanding, with a hefty dollop of nostalgia thrown in – the husband-and-wife-team of Nathan and Julie Gunn delivered it in spades. Their Wigmore Hall concert carried the atmosphere of an old-time broadcast from Radio City Music Hall, or, perhaps even the intimacy of an after-dinner parlour performance from the turn of the 20th century, and, notwithstanding the fact that much of the (all-American) music was from later decades, a Stephen Foster song – or even a recitation of some Emily Dickinson – would not have seemed out of place.

Nathan Gunn’s operatically trained voice is warm and resonant; there’s a dark, covered quality to it that was spot-on for numbers such as Samuel Barber’s With Rue my Heart is Laden or the two Gene Scheer songs (At Howard Hawks’ House and Omaha Beach from his Voices from World War II cycle), but at the top of his range there’s also power and ‘ping’, so that up-tempo numbers such as Irving Berlin’s I love a piano or William Bolcom’s Broadway-chorus-style Fur were delivered with accuracy, energy and panache. Julie Gunn provided sensitive piano accompaniment throughout, as well as taking the spotlight herself for some of the instrumental sections, such as the thoughtfully romantic piano break in Jimmy van Heusen’s classic Here’s That Rainy Day, or the ‘Nachspiel’ for Ben Moore’s The Lake Isle of Innisfree. That they are more than a musical partnership shines out in the communication between them, and the fun they have with the music, so that the oddly formalised performance of Steve Goodman’s City of New Orleans (made famous by Arlo Guthrie) regained some of its folky/country quality from Julie’s added sung harmonies, and Bolcom’s Over the piano (‘He sang songs to her over the piano’) gained an added intimacy.

The programme was cleverly chosen and prepared, such that the mood changed gradually across groups of songs. It began with some up-tempo humour (that included Charles Ives’ witty portrayal of galumphing animals in The Circus Band) through to sentimental nostalgia (Harold Arlen’s I’ve got the World on a String and an utterly enchanting account of Jimmy Van Heusen’s Sinatra classic Polka Dots and Moonbeams with a deliciously bluesy strolling piano bass) and moved to loneliness (including the alternating introspection and bravado of Kurt Weill’s This is the Life and Leonard Bernstein’s Lonely Town, in which the pair beautifully pointed up the contrast between the up-tempo quickstep accompaniment and the melancholic melody). The evening finished with a collection of cabaret songs that ranged from sinister (Bolcom’s Black Max, the final sibilant of which raised a shiver) to angular (John Musto’s modern rag Recuerdo) and almost angry (Jay Gorney’s classic 1930 Brother, can you spare a dime? given a bluesy ragtime treatment with a hammering piano ostinato).

The programme also included some very modern material, such as an account of the Sacramento-based band CAKE’s 2001 Opera Singer and Tom Waits’ 1976 The Piano Has Been Drinking. True, the performances were necessarily less colourful than the originals, but the material worked, somehow, within the context of the evening.

For those of us of a generation old enough to remember the Pinky and Perky show as part of pre-bedtime Sunday-evening viewing, the encore performance of Lewis Muir/Maurice Abrahams’ Ragtime Cowboy Joe provided an opportunity for an even longer walk down memory lane.

Perhaps the only cavil is that some printed words would have been helpful; although the songs were all in English, Nathan Gunn’s rich delivery sometimes didn’t make for easy comprehension.