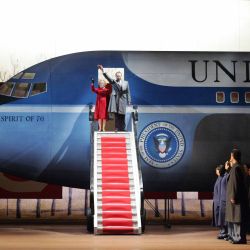 John Adams’ extraordinary opera, conceived by the Director and long-term collaborator Peter Sellars, is revived at the Coliseum – miss it at your peril.

This work is so much more than the dramatisation of a real event in near history – the first visit, in 1972, of an American President to communist China.

The layers of fact and fantasy are so skillfully woven, the characterisation of the protagonists so compelling, and the emerging culture clash so tellingly developed that the performance is, quite simply, stunning.

Adams’ minimalism shares a great deal with Philip Glass, but a key difference between this opera and, say, Ahknaten is that instead of a few simple vocal lines frequently repeated, Adams sets whole conversations, often based closely on reports of the event. Alice Goodman’s libretto warrants a warm mention here, not least for her deft touch with ironic lines (“he reads too much” mutters Nixon when Mao has praised one of his books).

The historic meeting between Nixon and Mao in 1972, with a trio of secretaries-cum-translaters acting as a mini-chorus, is fascinating and although it portrays Mao as an intelligent philosopher and Nixon as rather a hick, the opera neither satirises nor derides the characters.

Delightful asides (“News! News!”) during the endless handshakes on the tarmac leave us in no doubt that Nixon is conscious of the historic nature of the visit, though later events of course meant he left a very different legacy in the collective mind of the Western world. Pat Nixon comes across rather splendidly as slightly naive but warm-hearted woman, responding openly and honestly to a new culture.

Both are excellently sung by the creators of the roles. James Maddalena is absolutely believable as Nixon, Janis Kelly does a mean Pat impersonation and both are in wonderful voice, coping well with the occasional excursions into the tonal stratosphere. Judith Howarth gives her all as Madam Mao and relishes the dramatic possibilities of the role once surrealism supplants the reality of the opening scenes.

Mark Stone is the find of the evening, however. While I would prefer to reserve judgment until I hear his voice without the “electronic enhancement” requested by Adams, his creamy, beautifully regulated baritone in the key role of Chou-en-lai was a treat. Nominated for a South Bank breakthrough award in 2005, he will be singing Almaviva in ENO’s new production of Figaro in the autumn, and should be delicious in the part.

It’s always a delight to have Paul Daniel back in the pit, and true to form he injects his boundless energy into this exciting score. The dramatic moments – and let’s face it, there aren’t too many operas featuring the Presidential plane landing on stage – are thrilling and the pace perfect throughout, with the more lyrical moments (including the closing, melancholic thoughts of Chou-en-lai – “How much of what we did was good?”) handled with great sensitivity.

The production, quite apart from the aforementioned plane, still looks terrific, with the Mark Morris choreography for Madam Mao’s didactic ballet (terrific in the other sense) providing a great showcase for some expressive and athletic dancing from Nicola Tranah as the revolutionary ballet heroine.

Why has ENO scheduled only five performances of this wonderful work? It was gratifying to see the House virtually full on the opening night, so book your ticket while you can still get one.