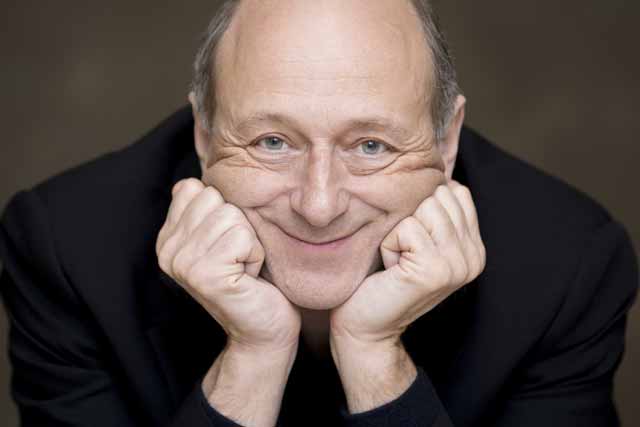 Iván Fischer is renowned for re-examining familiar works, deconstructing them and even reconfiguring the orchestra, with players seated where you wouldn’t normally expect to see them. So it was a given this concert by the Orchestra of the Age of Enlightenment, billed as Mozart’s Final Flourish, wouldn’t be a straight-forward play-through of the composer’s final three symphonies, numbers 39, 40 and 41 (The Jupiter).What was unexpected, however, was to see in the programme the interval slotted into the middle of the 40th, between the second and third movements.What possible justification could there be for this act of musical vandalism?

All was revealed when Fischer addressed the audience before the start. These three symphonies, unusually for Mozart, were written without a commission and in quickfire succession of each other – a final flourish indeed. Fischer’s teacher, the renowned conductor Nikolaus Harnoncourt, viewed these works as a single twelve-movement work, and as such this is how they were going to be presented tonight, hence the interval smack bang in the middle of proceedings.This was an interesting view, but a pretty tenuous one, given each is written in a different key, and there’s little to link them together save the timescale in which they were composed. He also invited us to applaud between movements “in order to avoid those embarrassing silences”.

Luckily there was much to enjoy in the music-making, none more so than the verve and energy which the players displayed throughout. Their unadulterated joy and enthusiasm was palpable, and although it shouldn’t need saying – hearing Mozart played on original instruments is as bracing as it is rewarding. Despite a highly charged, stentorian introduction to Symphony No. 39, with all guns blazing, the string playing took a while to settle, despite some finely-honed interplay between the firsts and seconds (arranged antiphonally) in the second movement, complete with sharp, snipped phrasing. With its trio based on a real folk dance the vaguely comic squeeze box woodwind interjections brought a wry smile to the face, and highlighted the different orchestral colours Mozart brought to life so vividly.

There was unexpected menace and bite to the opening of Symphony No. 40, again beautiful phrasing by the strings, and here the oft-mercurial Fischer got right to the heart of the work, mining its despair and eliciting wonderous playing from all sections of the orchestra. The finale had colossal guts and drive, underpinned by some exceptional horn playing.

Mozart’s final symphony is one of those rare works which radiates unalloyed joy from every bar, no more so than in the exuberant outbursts of trumpets and timpani in the first movement, which is why commentators named it ‘Jupiter’ – as if the Roman God were laughing heartily. Whether or not that’s the case, the euphoric opening found the orchestra on blistering form.There was a light touch to the Andante, whilst the minuet was flawlessly delivered. Surprisingly the finale, labelled molto allegro, could have done with a bit more drive. On leaving the hall cards were handed containing principal oboe Daniel Bates’ thoughts on the ‘Jupiter’ and while agreeing with his view that the symphony should have the same effect on the listener ‘as your dog jumping up and down to welcome you home’, Fischer’s rather stately tempo felt more like a cat rubbing against your leg. Nevertheless, this slight niggle didn’t detract from an evening infused with so much charm, power and joie de vivre.