It was not easy being deprived of live music over the long Easter weekend, but there is a way to enjoy it. 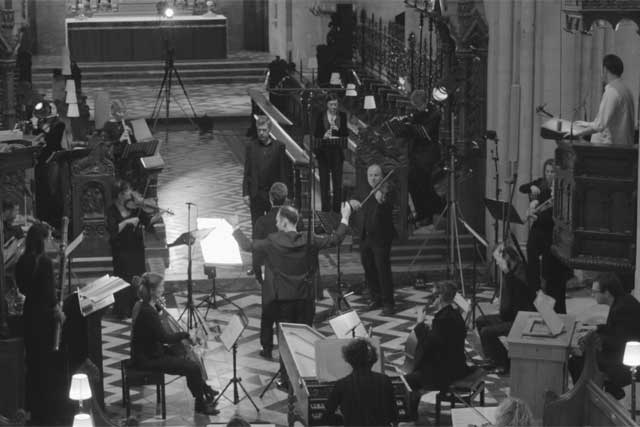 “A remarkable online event” was promised by Michael Chance, the Patron of the Oxford Bach Soloists, and he was not wrong. The terms ‘re-imagined’ or ‘stripped clean’ or, heaven forbid, ‘semi-staged,’ are guaranteed to make some of us cringe, but in the case of this group’s St John Passion, we finally saw what an ‘enactment’ can be, when it is carried out with such intense seriousness, commitment and devotion.

In the beautiful setting of Christ Church Cathedral, the work was presented as the anguished story of John the Evangelist, with other singers as either commentators or active participants, and the instrumentalists an integral part of the drama. It worked exceedingly well, so much so that it’s tempting to see this online style as having advantages over ‘live’ performances, in that you are enabled to see the players in great detail, and understand more fully how music and narrative are intertwined.

Nick Pritchard was a sympathetic Evangelist, telling his story as if impelled, almost with the air of a young ‘Ancient Mariner.’ His voice is beautiful but of course that is not enough for this role, and he gave us much more, from his deeply convincing phrasing to his restrained yet completely involved acting. Peter Harvey was a most moving Christus, and Alex Ashworth an impressively conflicted Pilatus.

The choir was no less remarkable, and it was a delight to see the established alto Helen Charlston and the up-and-coming soprano Rowan Pierce as ‘mere’ chorus members, allowing other less experienced singers to take the arias. There are some really impressive voices here, including Lucy Cox’ vibrant soprano in ‘Ich folge dir gleichfalls’ and the very fine altos of Alexander Chance and Hugh Cutting. Ben Davies sang the exquisite arioso ‘Betrachte, meine Seele’ with exceptional tenderness. Those last four names are certain to join the first two in the prestigious ranks of Bach and Handel singers.

“…in the case of this group’s St John Passion, we finally saw what an ‘enactment’ can be…”

The small, socially distanced choir sang with devotional expression, especially in ‘Durch dein Gefängnis, Gottes Sohn’ and the sublime closing Chorale, ‘Ach Herr, lass dein lieb Engelein.’ There was some wonderful playing to be savoured, particularly from Yu-Wei Hu (Flute), Frances Norbury and Oonagh Lee (Oboes), and Bojan Čičic (Violin). Tom Hammond Davies rose to the considerable challenge of keeping it all together, and Thomas Guthrie’s direction was such that the roving microphones and spaces between the participants seemed almost advantageous.

After that stunning Good Friday offering, the Easter Sunday performance was the appropriately more joyful Easter Oratorio. The lively opening Sinfonia may recall the Christmas Oratorio  in its sense of unbridled joy, although in this work the solo oboe of the ‘adagio’ suggests contentment as well. The arias are sung by Mary, Mother of James (Rowan Pierce), Mary Magdalene (Helen Charlston) Simon Peter (Nick Pritchard) and John the Evangelist (Ben Davies) – all of them giving very fine performances, especially Rowan Pierce in ‘Seele, deine Spezereien’ and Ben Davies in ‘Wir sind erfreut.’

Instrumentally, the trumpets were the stars – Russell Gilmour, Steve Keavy and Robert Vanryne may be new names to most of us, but they were outstanding. The complex solo oboe part in the second section was brilliantly played by Frances Norbury, as was the bassoon part in the allegro, by Catriona McDonald.

The simpler, ‘choir in the stalls’ style used here was appropriate for the work, with Tom Hammond Davies once more uniting his forces to produce an impressive sound. If you did not see either of these performances – the St John Passion is most warmly recommended – you can catch them here, on demand until April 30th, plus the Cantatas Christ lag in Todesbanden and Der Himmel lacht! Die Erde jubilieret.