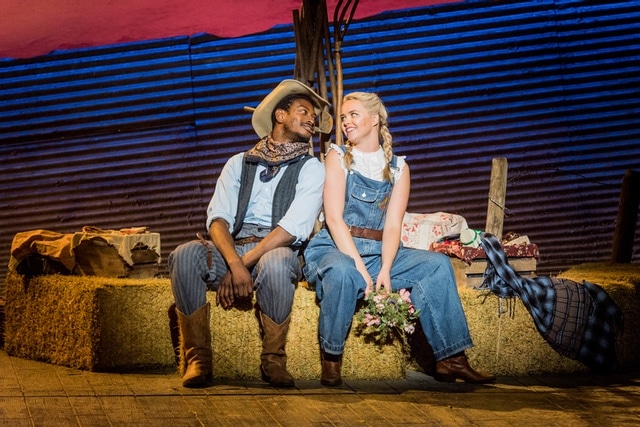 ‘No gags, no girls, no chance!’ was columnist Walter Winchell’s verdict on Rodgers & Hammerstein’s Oklahoma! when it premiered in 1943. He might have more accurately reported that there were ‘no tickets’ available as it went on to enjoy a then record breaking 2,212 performances on Broadway, but his comment does reveal how groundbreaking the musical really was. When audiences were used to seeing Busby Berkeley-style shows that invariably began with rows of chorus girls, the opening image of a lone middle-aged woman churning butter would have been surprising to say the least.

Nevertheless, what was revolutionary then can still feel problematic today. To our eyes, it feels as if the supposed villain of the piece, Jud Fry, is poorly treated. He reportedly has a shady past, but it also feels as if he has grown to fit the sinister image that others have projected onto the labourer as they look down their noses at him. Despite Aunt Eller proclaiming him to be her best hired hand, she confines him to the farm’s smokehouse to sleep. Laurey uses him as a pawn to get back at the man she really loves, Curly, who in turn tries to persuade him to hang himself to remove his rival from the equation.

This does not suggest that Rodgers & Hammerstein were advocating prejudice, but that they were exposing it by planting points designed to make us think within what is still a predominantly light-hearted work. The secret to the success of this production that opens Grange Park Opera’s 2018 season, the first to see its recently built Theatre in the Woods sport its external brick cladding, is not to shy away from the musical’s potentially distasteful elements. Director Jo Davies has enjoyed success with Rodgers & Hammerstein before, having directed Carousel for Opera North in 2012, and her production enables many serious points to come through without undermining our ability simply to enjoy the show. She does this by, on the one hand, ensuring that uncomfortable moments are not swept under the carpet, and, on the other, by making several characters more full-blooded than usual. In this way, Aunt Eller is not reduced to churning butter, but rather dons overalls and fixes a tractor. Similarly, the supposedly fickle Ado Annie is shown to be the way that she is, not because she is dumb as many productions suggest, but precisely because she is her own person. 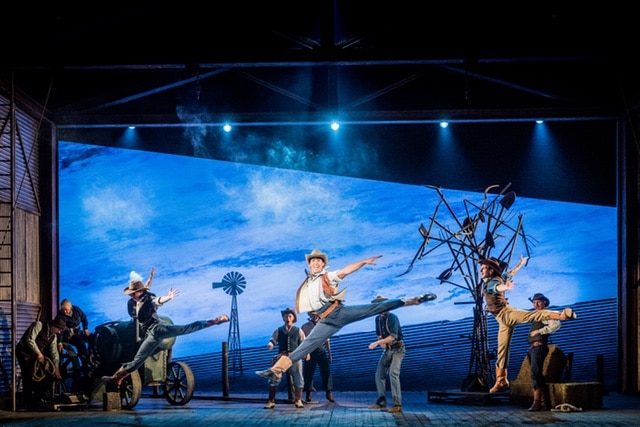 At the other end of the spectrum, the final trial is not played up as a piece of fun. Jud may ultimately have caused his own death, but there is still something unsavoury about the community feeling it has the right not to investigate it thoroughly. This is exposed to the full by Aunt Eller suggesting that they do not ‘break the rules’ but ‘just bend them a little’ with real rage, as opposed to a nod and a wink. In the same way, the fights that regularly erupt, even during the jovial ‘The Farmer and the Cowman’, feel quite hard hitting.

Francis O’Connor’s brilliant set presents a barn of corrugated iron that is initially closed. As a result, the action begins with its doors sliding apart a little to reveal Curly perched on some hay bales singing ‘Oh, What a Beautiful Mornin’’. When the structure opens out it reveals a background of sky and cornfields that create diagonals. These are not only aesthetically pleasing in their own right, but also indicate the direction of the narrative as, for example, Curly and Laurey exit along its different diagonals. Scene changes are carried out with great slickness and skill as the performers move the props around themselves. When Jud’s smokehouse is ingeniously lowered into place, the women who help carry out the change then linger in the room momentarily to signify what he truly desires.

There are a few moments that do not quite hit the mark. ‘It’s a Scandal! It’s an Outrage’ normally ends with the men proclaiming that they need to ‘start a revolution’ and the women bursting on and ordering them to ‘revolve’. As it is a purely comical moment, it is hard to know what it is achieved by omitting it. Similarly, during ‘Pore Jud is Daid’ Curly sings the word ‘good’ (which repeats what Jud has just sung, while also implying happiness at his death) so quietly that it almost feels as if he is embarrassed by it. It undoubtedly constitutes a dark joke, but it is one that cannot be shied away from. 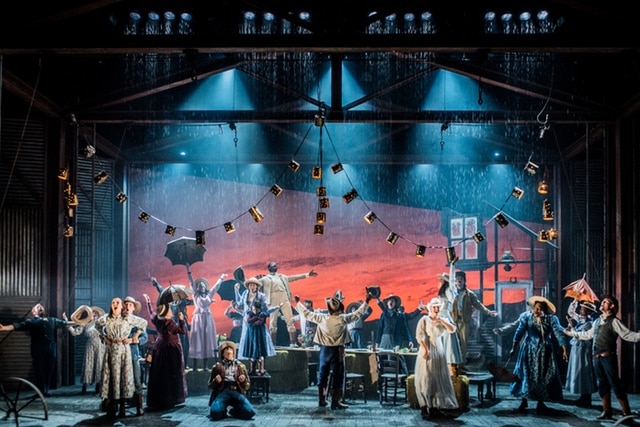 Nevertheless, with some excellent effects, including torrential rainfall, and superb dance routines, with Andrew Wright’s choreography combining complexity with exuberance, the highs by far outweigh the lows. The cast is led by Dex Lee, recently seen as Know Moe in Five Guys Named Moe in London, who proves to be an excellent all-rounder as Curly. It is also a bonus that he and Katie Hall’s likeable and sweet-voiced Laurey dance the Act I ballet themselves, rather than handing over to doubles as so often happens.

Claire Moore has immense presence as Aunt Eller, Natasha Cottriall is a suitably feisty Ado Annie and Louis Gaunt dances the role of Will Parker to excellent effect. Steven Serlin proves to be a class act in the predominantly speaking role of Ali Hakim, as does Phillip Rhodes as Jud Fry. He feels sinister enough, but is also handed an air of nobility that makes us feel some sympathy towards him as we suspect that it may be society that is to blame for the way that he is. It is also highly unusual to hear a baritone sounding so smooth when singing as low as Jud’s role sometimes requires.

One of the great joys of hearing musicals at summer opera venues is that they can enjoy the type of orchestral forces that a lengthy West End run would never permit because of the expense involved. Here, the contribution of the BBC Concert Orchestra, under the baton of Richard Balcombe, is tremendous and helps to cap what is a memorable evening all round.