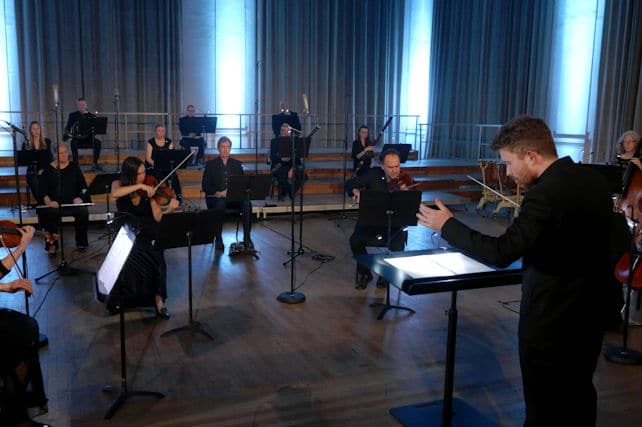 The coronavirus pandemic has hit orchestras hard, but the exigencies of streamed, audienceless performances involving fewer, socially distanced players have allowed some strange and beautiful blooms to flourish. Such a one is the OAE’s offering ‘Embers of Romanticism’ for Valentine’s Day.

The programme features five works – most of them extracts – arranged for reduced forces by the orchestra’s Principal Horn, Roger Montgomery. And, thanks to Montgomery’s sensitive and inspired arranging, some first class sound balancing, and the conductor, Geoffrey Paterson’s innate feel for the detail of orchestral texture, the 45 minute concert is a sheer delight. Given there are only four string players, the immediate reaction is to recall Salieri’s remark in Amadeus about the “rusty squeezebox” of Mozart’s Serenade for 13 Wind Instruments, but this is far from the case. Although there are none of the sweeping string passages one expects from Wagner and Strauss, thanks to the aforementioned recording genius, there are some beautiful moments where a single string part shines out from the warmth of the wind texture.

This is particularly apparent in Webern’s Opus 1 Passacaglia for Orchestra. If Webern can be said to have a ‘much loved work’, this is it, as it’s his only non-serial orchestral piece. Paterson and the ensemble make the most of its mystical lyricism, and the violins stand out even in its most animated passages to add the edge that’s needed for the disquiet in the work. Indeed, the reduced forces completely alter the context of the piece, and seem to bring its modernism even further forward, calling to mind mid 20th century works for mixed ensembles performed by the likes of The Fires of London.

“The coronavirus pandemic has hit orchestras hard, but the exigencies of streamed, audienceless performances… have allowed some strange and beautiful blooms to flourish.”

The longest extract presented is Wagner’s Prelude and Liebestod from Tristan und Isolde, and from the opening richness of Catherine Rimer’s cello solo, the listener loses all doubt about the intensity of the performance ahead. Despite the shortage of instruments for divisi work, the brass chorus still carries a warm solidity, and there are some exquisitely crafted moments in the Prelude where a string quartet is contrasted with the winds. The string shimmer in Liebestod is still there to delight, and Paterson keeps good control of the pacing to allow the listener the usual climactic payoff, crafting some extraordinary, momentary crescendo/diminuendo effects.

The opening of the Vorspiel to Act II of Hans Pfitzner’s Palestrina gives the horns another chance to shine, as well as allowing the brass off the leash in some controlled bursts of textured brilliance – and the wind sections altogether are almost chiming towards the end of the extract. The only letdown here is that the piano – presumably incorporated to add some percussive texture – is nearly inaudible.

Again, the smaller forces bring a new context to the brief extract from Richard Strauss’s Salome (Salome’s tantrum after rejection). Sadly, again, the additional piano cannot be heard, but the other instruments carry their solos of Strauss’s leitmotivs (all packed into this short interlude) to perfection.

Texture is once more to the fore in the Vorspiel to Act III of Wagner’s Meistersinger, and once more, there is elegant contrasting of the string quartet against the winds, with Paterson and the ensemble presenting some seductively burnished builds and decays throughout.