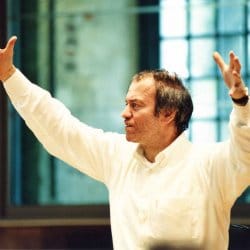 The weightier part of the first of three Shostakovich concerts given by Valery Gergiev and his Mariinsky Theatre Orchestra and Chorus was the Thirteenth Symphony, known in the West (but not in Russia) as Babi Yar.

This was the name of the Ukranian ravine where thousands of Jews murdered by the Nazis were dumped during the Second World War.

Shostakovichs five-movement Thirteenth Symphony is set to five of Yevgeny Yevtushenkos poems, the first of which is entitled Babi Yar.

The poem deals with the non-Jewish Yevtushenkos outrage about the Babi Yar atrocity and about his horror of anti-semitism wherever it happens.

Presumably this Jewish connection of the Thirteenth Symphony prompted Barbicans educational department to theme the first of their three pre-concert talks (preceding each of the three concerts) as Shostakovich and Jewish Music. The charming and witty musicologist Marina Frolova-Walker, presenting all three talks, was joined by another Russian music expert – Alexander Ivashkin – and by the Barbicans Artistic Director Graham Sheffield in an attempt to show the appearance of and – evidently more importantly – the reasons for Jewish music in Shostakovichs compositional output.

We heard from the panel that the most likely reason for Shostakovichs use of Jewish elements must have been his opposition to anti-Semitism, as among his friends and pupils there were a number of Jews. My problem is that none of the music examples played to us convinces me that Shostakovich used Jewish elements in particular. We heard a recitative violin solo from the Second String Quartet, supposedly similar to chanting in Jewish literature. But I heard such cantilena in various old folk music (nowadays known as world music) too! Then we heard a section from the Eighth Quartet, again reminding me of various folk music. And finally a song from Shostakovichs cycle on Jewish folk poetry sounded, even according to Marina Frolova-Walker on the panel, as a song composed by Schubert. So this pleasant and generous pre-concert talk (free to people with tickets purchased for the concert) somehow lost its point. Especially as the partly Jewish-themed Babi Yar symphony, the main event of the concert, shows no Jewish elements musically.

All 5 Yevtushenko poems – the others are Humour, In the Store, Fears, Careers – used by Shostakovich for the five movements of his symphony deal with the hardships, that is with the dark side, of life. He sets the work for a solo bass voice and a chorus of bass voices – you cannot get darker than that! – and for a large symphony orchestra.

Soloist Sergey Alexashkin sang with integrity and with respect for text and music. With such dramatic poems it would be easy to rely on effective gimmicks. However, Alexashkin – most probably very familiar with this composition – relied on musical phrasing, voice control (with some amazing crescendos) and clear diction. The top notes of the solo lines range might be a bit high for Alexashkin, as – to well-trained ears – occasionally he sounded slightly strained.

The chorus was magnificent – what is better than a chorus of Russian bass voices! – but I could not help feeling that they were slightly undernourished. There were 28 singers which indicated possible extra singers (as, according to the programme, the Mariinsky have only 17 bass singers in their company). Perhaps the extra singers were not as confident in their projection. But, at any event, in his score Shostakovich specifies 40-100 voices in this bass choir. Come on, Roman Abramovich, support Russian basses to let us hear them as Shostakovich envisaged!

The Mariinsky orchestra is a highly disciplined force. Listening to them reminds me why nobody – not Napoleon, not Hitler – has managed to conquer Russia. These orchestra players fully focus and give themselves to the task 100 per cent. There are some excellent individual players among them (their first bassoon player is extra-ordinarily musical, their tympani player an amazing force to reckon with, and so on) but they also work magnificently as a team. Their very vibrant double-bass section is unique with their vitality, their viola section has put all viola jokes to death with their virtuoso rendering of the demanding semiquaver passages in the fourth movement.

Occasionally a solo player – in one orchestra section or the other – might not observe the dynamic marks exactly as shown in my score. But as a team they always deliver, without fail, what is intended by the composer. On the other hand, I was surprised by the delicate decrescendo by the celesta player at the end of the piece, leading to a magical ending. I did not know that such delicate playing was possible on the celesta. Gergiev held the magic for the prolonged last note plus much longer and the audience was with him. Nobody clapped until we all experienced the magic in silence and with respect.

In the first half of the concert we heard Shostakovichs Sixth Symphony which -unusually – starts with a slow movement (followed by two movements). Just as well, as I felt that the orchestra needed warming up. Much to my surprise they started their very first note a touch after Gergievs beat. Perhaps the orchestra missed the violins (as the movement starts only with low wood-winds, violas and cellos). But soon after the start everything fell into shape and the orchestra was dazzling.

I admit that this composition does not strike me as great, at least not on the first hearing. But Gergiev manages to breathe life into everything, especially into Russian music. To my mind, his tempis are excellent even though his fast movements (for instance, in this case, the last Presto which Gergiev started without the slightest break after the second movement) can sound driven. Nevertheless, Gergiev does not spoil anything in the score: in this particular case, his mastery is a God-sent addition to the score. Long may Maestro Gergiev continue!