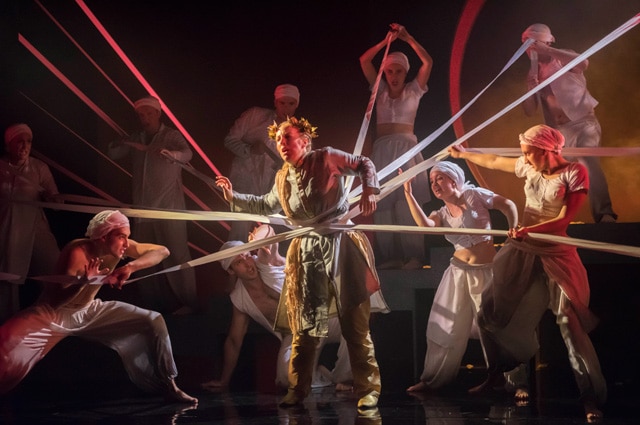 Every year Longborough Festival Opera brings one of the productions that it stages in the Cotswolds to London, and this year it is the turn of Gluck’s Orfeo ed Euridice. Director Maria Jagusz employs the original 1762 Vienna version, sung in Italian, rather than the more commonly performed French version Orphée et Eurydice, which premiered in Paris in 1774.

King’s College London’s Greenwood Theatre is, unlike Longborough’s opera house, tiered, and the orchestra is situated in front of the stage rather than in a sunken pit. Nevertheless, since the stage’s dimensions are similar and the first four rows of the stalls are kept empty to aid sight lines, the overall experience of watching the production here, as opposed to the venue for which it was primarily designed, feels surprisingly authentic.

The story is told in a fairly straightforward manner, with Richard Studer’s set consisting of a ‘monolith’ that contains a hollowed out circle or portal, and two staircases that both lead up to it. The fact that the pair do not follow a symmetrical layout aids the visual interest by enabling the formations that the chorus make as they cross them feel unorthodox. It also creates a larger space on one side of the stage in which the greater dance routines can take place. 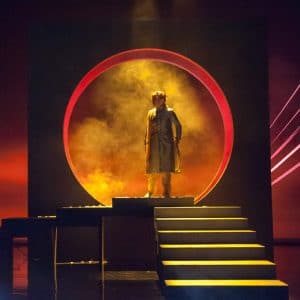 Two professional dancers, Jordan Scrase and Emily Smith, play Blessed Spirits and dance some routines on their own. These include the ballet that precedes the final ‘Trionfi Amore’, in which they re-enact the death and resurrection of Euridice that we have just witnessed. The majority of the ballet routines, however, are executed by the Longborough Festival Chorus as well, which has the advantage of ensuring that the music, drama and dancing always feel well integrated. In the generally successful 2015 production at the Royal Opera House from the English Baroque Soloists and Monteverdi Choir there was a designated group of ten dancers. When the Furies first appeared the crazed dancers were confined to the back of the stage so that the act of physically confronting Orphée (the French version was employed) was left to a rather more timid group of singers. There are no such problems here as the Furies wrap cords around Orfeo only for these to snap (or be pulled away) when they succumb to his voice and lyre playing.

Choreographer Mark Smith ensures that the chorus are used to good effect. During the Overture they create streams of movement as they traverse the staircases, and whether they are moving or simply huddled in a mass observing the action they frequently adopt gestures that signify fury or fear and which seem reminiscent of Greek theatre. At the end of Act II’s first scene the boat that carries Orfeo to the Underworld is especially effective as it is formed by the chorus huddling together in an appropriate shape, and swaying to make it look as if the entire object is floating. At the front Scrase and Smith form the bow with a pose that seems reminiscent of the Soviet sculpture, Worker and Kolkhoz Woman.

Jeremy Silver conducts the Longborough Festival Orchestra, and following a relatively powerful rendering of the Overture several instrumentalists disperse to various locations. This ensures that at times there is, for example, an ‘echo’ effect as the line produced by the ‘pit’ is responded to by offstage forces. Orfeo ed Euridice is the 2017 production that serves the Young Artist programme, Longborough’s initiative to help emerging singers and players, and the cast reveals a wealth of talent. Hanna-Liisa Kirchin as Orfeo displays a well developed and beautifully deep mezzo-soprano (while the 1774 version was written for a tenor, the 1762 original would have been sung by a castrato). Nazan Fikret as Euridice reveals a full and aesthetically pleasing soprano, while He Wu’s portrayal of Amore also demonstrates vocal and dramatic prowess.