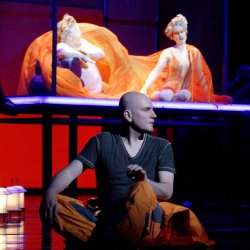 First performed in 1607, Claudio Monteverdi’s masterpiece Orfeo wasn’t quite the first opera written – that honour goes to Peri’s Dafne – but it’s testament to the brilliance of the composer that it sounds as fresh today as it must have done then.

This new production (a co-production with the Handel and Haydn Society, Boston) is as much a visual as an aural treat, marking the ENO debut of Chinese-born director, choreographer and actor Chen Shi-Zheng.

His production crosses all cultural and expressive borders. Combined with the vivid period sound of the ENO Orchestra in collaboration with the Orchestra of the Age of Enlightenment under Laurence Cummings, the final effect is as near-perfect an experience as one could hope for.

The opening fanfares played on period instruments placed in the stage boxes set the scene for the evening: this is no limp recreation of a tepid classical piece. This is forceful, emotional, a drama into which one cannot avoid being drawn.

The stunningly simple visual images (all praise to lighting designer in particular, Scott Zielinski and set designer Tom Pye) are surely the most innovative treatment of the Orpheus myth since Jean Cocteau’s ground-breaking 1950 film, Orphe.

As Music delivers the prologue against a stark moonscape we are in universal territory for the immortal story of love and loss. Scene after scene brings fresh wonders: the river Styx is one of the most memorable, created purely from light, constantly shifting. Others astound by use of colour alone, or are enhanced by the vivid imagination of costume designer Elizabeth Caitlin Ward.

The cross-cultural cast helps the universal theme, too. The honey-toned John Mark Ainsley is Orfeo, looking rather like a Sun-reading construction worker in his orange and grey costume, to my mind the one questionable design choice. His Eurydice is the beautiful Ruby Philogene, in grace and voice like an ultra-slim version of Jessye Norman, making one wish Monteverdi had written a larger role for the heroine.

Chen Shi-Zheng brought with him his own foundation, the Java-based Orange Island Dance Company, whose seven female and five male dancers delighted the eye in a series of roles, most memorably spirits charmed by Orfeo’s music into helping him outwit Charon (chillingly sung by Brindley Sherratt).

There isn’t a weak link in the performance. The many cameo roles, doubling as part of the ensemble chorus, are superbly cast: Tom Randle in suitably radiant voice as Apollo, even (especially!) when suspended precariously on high; Jeremy White as an imposing and implacable Pluto, and the delightful Stephanie Marshall as Proserpina, emerging from her brilliant cocoon of a couch (fabulous invention here) to petition her husband for mercy.

Elizabeth Watts is Music and Hope, with a lovely tone and wonderful diction. This was a performance without surtitles, and what a delight – they weren’t needed at all. Wendy Dawn Thompson is moving as the messenger, delivering the tragic news of Eurydice’s death.

Laurence Cummings, Head of Historical Performance at the Royal Academy of Music, deserves huge credit for the baroque sound he conjures from the orchestra, having persuaded the strings to replace metal E strings with “the visceral qualities of gut as you find on baroque instruments”, to use baroque bows, and even to learn a new tuning system to produce the required seventeenth-century tonal qualities.

Monteverdi’s music is always going to be beautiful in its simplicity, whether played on period or modern instruments. The care given it here, and the careful attention to balance between orchestra and singers, makes this the performance – and the production – of a lifetime. Performed without an interval, one hour and 50 minutes pass in a flash, and all too soon the magic comes to a close.

No wonder there are always fresh flowers on Monteverdi’s tomb in Venice.