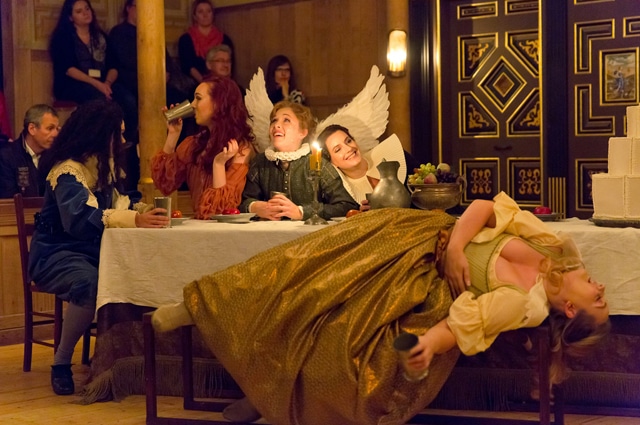 No-one could accuse the Royal Opera of not exploring the legend of Orpheus thoroughly enough in 2015. The year began with a production of Monteverdi’s Orfeo at the Roundhouse, June saw Harrison Birtwistle’s take on the myth The Corridor come to the Linbury Studio, Gluck’s Orphée et Eurydice graced Covent Garden’s main stage in September, and now Luigi Rossi’s Orpheus appears at the Sam Wanamaker Playhouse.

Whilst music can frequently be heard at the Jacobean theatre, fully staged operas there are more of a rarity. This production represents only the second Royal Opera / Shakespeare’s Globe collaboration following Kasper Holten’s highly successful production of Cavalli’s L’Ormindo, which has already enjoyed one revival.

Orpheus of 1647 is a slightly odd piece because, although on the surface it feels intrinsically Italian, it was written specifically for a French audience, First Minister Cardinal Mazarin having commissioned Rossi to write it to bring Italian culture to Paris. The full work lasts around six hours and in cutting it to just over three (including two intervals) we may be experiencing a slightly distorted version, for much of the French propaganda that was written into it is now missing. Nevertheless, it still seems safe to say that in comparison to the versions by Monteverdi and Gluck this one comes with a huge side serving of humour.

The story of Orpheus as we normally think of it only begins halfway through the second of the three acts. Until then, much time is spent focusing on Aristaeus, a jealous would-be suitor of Eurydice who enlists the help of Venus to try to steal her away from Orpheus. In many ways, the opera’s mirth works well with the setting, as director Keith Warner uses many of the same devices that Holten employed in L’Ormindo such as having characters descend from the roof on ropes and swings, and appearing in all parts of the auditorium. 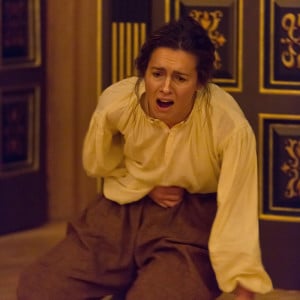 Dance is utilised effectively, with the brandishing of apples during the Overture and elsewhere highlighting passion and desire, and lighting levels are altered through the use of candles. When an earthquake disrupts Orpheus and Eurydice’s wedding the candle holders suddenly shoot up to the roof as various benches collapse. The transformation of Venus into the old woman Alkippe is also cleverly executed as it is presented to look like a quick-change act.

The humour, however, can overshadow the genuine love affair between Orpheus and Eurydice. In Act I we spend insufficient time with the pair to feel the intensity of their emotions so that, because they are not generating the same laughs as the other characters, they come across as lacklustre. A certain humour is also brought to Eurydice’s death as she is bitten by the most comical of snakes before Aristaeus attempts to revive her with a ‘kiss of life’ for his own ends. The mood changes, however, as she is left alone to die, accompanied by beautiful veiled singers, and Act III focuses more on Orpheus’ sorrow and quest to retrieve her. Nevertheless, although this is more serious and moving, Orpheus’ final lament is immediately followed by a jolly song and dance that proclaims his and Eurydice’s place among the stars, making the opera feel like a rather odd concoction from start to finish.

The performance is in English, with Christopher Cowell’s translation capturing the same sense of bawdiness that was surely in Francesco Buti’s original libretto, while never pushing things too far. As a result, anachronistic statements, such as the assertion that this is a Jacobean play, only add to the mirth. There are no surtitles, but enunciation is extremely strong across the board, and it is this that enables us to laugh when Alkippe pretends to give Aristaeus a singing lesson saying that it might even improve his intonation.

The excellent cast is led by Mary Bevan, who brings great depth to the role of Orpheus, and Louise Alder, whose Eurydice is imbued with sweetness and grace. Caitlin Hulcup is a splendid Aristaeus with a strong lower register, and Sky Ingram a striking and alluring Venus. Keri Fuge as Cupid complements a fine soprano with a suitably sweet and cheeky persona, while Graeme Broadbent reveals the most magnificent bass voice as the Satyr and Pluto. The trio of Lauren Fagan, Jennifer Davis and Emily Edmonds sound very good together as they play, among other parts, the Three Graces. The Early Opera Company Orchestra, situated in the gallery and conducted by Christian Curnyn from the harpsichord, is also on excellent form as it tackles a score that sounds something like a cross between Monteverdi and Cavalli.