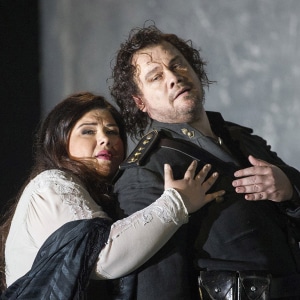 The Edward Gardner / Stuart Skelton / David Alden trio has been triumphant on the ENO stage in the past, but this production, unlike their previous collaborations, seems tentative rather than definitive. The orchestra plays superbly for Ed Gardner, and it is from the pit that the most searing, dynamic, tender, lyrical moments come – whether whipping up a terrifying frenzy in the storm scene, or caressing the vocal line in ‘Già della notte densa’ the score is given a truly devoted and poetic performance.

Stuart Skelton might seem perfect for Otello in terms of his demeanour and vocal heft, but sadly the production has him shambling about like a big bear looking for somewhere to hibernate; where is the nobility of this commander, who saved a city state and won the heart of a Venetian lady? We see his rough-edged romantic quality clearly enough in the love duet, but overall it’s his untamed nature which is prominent. That’s true of the voice, too – raw emotion is never shirked, nor are ambitious phrasings, but the impression is of a not-quite-noble-enough savage. It does not help that he is often left to carry out the kind of stage business which merits the term “lame” – hurling armchairs about being a case in point.

Verdi wrote that whereas Otello must “sing and shout,” Desdemona must “always, always sing” – and this Leah Crocetto, making her UK debut, most certainly did, although not everyone would warm to her prominent vibrato. Her Desdemona is forceful rather than wilting (rightly, since Shakespeare’s original is anything but a wimp) and it was a shame that she was not more fittingly supported by the production – but more of that later. She had a fine handmaid in the clear-voiced Emilia of Pamela Helen Stephen.

Coleridge would certainly have approved of Jonathan Summers’ Iago, since he was “motiveless malignity” incarnate, although his once-rich baritone is now a shadow of its former self. Allan Clayton’s Cassio was cleanly sung, managing to create a sympathetic figure although he, like so many others, had little to work with. Barnaby Rea was a dignified, sonorous Lodovico, and Peter van Hulle a credibly besotted Roderigo. The chorus was magnificent – truly terrifying in the opening scene, solemnly brooding in the third act.

Of the many great moments in Shakespeare’s play which are faithfully used by Boito and Verdi, the scenes where Othello hints at what he imagines to be Desdemona’s lustfulness from the feel of her hand, and where the latter’s death takes place, are especially poignant. “Give me your hand. This hand is moist, my lady” – ”It yet hath felt no age, nor known no sorrow.” In this production, the words were finely sung, yet the singers remained metres apart – and the death scene was even more puzzling. In the play as in the opera, Iago brushes aside Othello’s idea of poison, saying that Desdemona should be strangled “…in her bed – even the bed she hath contaminated.” Needless to say, this did not happen, and the poor girl was throttled in the quadrangle.

Does this matter? Do we need to be all that literal? Well, yes, because it’s just as daft to have two characters supposedly inspecting the hand of one of them when they are steps away from each other, as it is to have to lovers singing about their joy at being in each others’ arms whilst standing at opposite ends of the stage – see productions of Fidelio, various. The lack of an interior and a bed mattered even more; the symbolic nature of the death was lost, as was its horrible intimacy – and one might also remark that if the Desdemona had had a bed on which to recline, or onto which she could gracefully sink, her demise would not have been greeted with unseemly laughter.

The production is set in a grey, ruined public space, and is beautifully lit by Adam Silverman; Jon Morell’s design is sparse, which in theory would enable intensive focus on the action. Sadly, there is much flailing about to little purpose and much throwing of furniture, and Maxine Braham’s movement direction feels aimless at times, especially in the final scenes. Why Emilia was dressed as a cross between a Norland nanny circa 1920 and a character out of Virginia Woolf – Sissy Miller springs to mind – no one seems able to fathom.

It was a joy to hear the orchestra on such wonderful form, as thrilling as always to experience one of today’s great tenor voices at full throttle, and exciting to hear the UK debut of so promising a dramatic soprano – but the production left us feeling as dull and grey as those chiaroscuro arches and vast, lonely square.