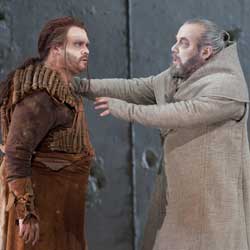 We appear to be in a quarry, with a chute for rubble and various vertical conveyor lines; the whole is grey, dusty and monochrome. But wait – is this a meteor I see hurtling towards, or rather away, from us? Who are these figures, variously clad in archbishopy robings, Python-style bandages (it’s just a scratch!) and Samurai armour? And what is this railway line for – are we on our way to the gas chamber?

More importantly, why do Parsifal and Kundry amble off down the railway tracks into the sunset, followed by the odd straggling knight, leaving Amfortas apparently blissfully dead? For those who don’t know it well, Wagner’s libretto instructs that Amfortas kneels before Parsifal, who holds the Grail aloft, and Kundry ‘sinkt entseelt zu Boden.’

I’m certain that some blogger or other will rush to tell me that I’ve failed to grasp the profundity of Lehnhoff’s staging, or that I’ve missed the boat on the post-structuralist world in which EastEnders has the same value as King Lear, and we can all do what we like with anything in the canon, literary or otherwise, or perhaps even that Kundry somehow represents the descending dove (presumably shot along with the Swan). I’m equally sure that every second review of this will draw flattering comparisons between it and ENO’s recent practice of bringing in non-opera directors – all I can say is, if this is the acme of what a proper opera director can do, then bring on the dancing girls.

Speaking of dancing girls, the Flower Maidens seemed to be a bed of ovulating Sweet Peas – alluring pistils, ladies – providing some much needed, if muted, colour. Kundry and Parsifal both appear to have strayed from the Metropolitan Museum’s somewhat foxed display of Stone Age Man, and Amfortas staggered around in a cross between swaddling bands and grave cerements – is that supposed to be profound? Gurnemanz looked as if he were about to officiate at a Greek Orthodox Mass, and poor old Klingsor was inexplicably Kabukied up, wobbling aloft on his parrot hoop behind a representation of a pelvis.

Worst of all, two of the great moments of this or indeed, any opera, went for nothing. When Klingsor hurls the Spear, it is supposed to hover over Parsifal before the hero seizes it and brings about the renewal of Nature. Here, we had an unseemly little tussle, more like two pre-schoolers squabbling over a toy truck than two men fighting over the future of mankind. Similarly, in the great scene where Parsifal sings ‘Nur eine Waffe taugt!’ and touches Amfortas’ wound with the spear, in this version wounded King and weapon remain metres apart – it reminded me of the sort of production of Fidelio where Leonora and Florestan are standing on opposite sides of the stage whilst singing lines like ‘Mein Mann an meiner Brust!’

Renewal of Nature? I jest, of course, as you might have guessed, it never happens; poor old Parsifal is left to sing lines like ‘Wie dunkt mich doch die Aue heut’ so schön‘ (How beautiful the meadows look today) whilst gazing rapturously at grey rubble. I suppose you could say this was comparable to Ruggiero singing ‘Verdi prati’ when he has seen the island for what it really is. Whatever.

The singing? Mostly very fine, especially Iain Paterson’s lyrical, warm-toned Amfortas and Andrew Greenan’s sonorous Titurel, both giving their all and phrasing with such style and crispness as to render surtitles superfluous. Stuart Skelton has the notes for Parsifal, and he clearly loves and understands the music, but I felt that his was a muted, subdued portrayal – it was as if he had been told to tone down the great heroic moments; it would not surprise me. Compared to his searing, visceral, cathartic Peter Grimes, his Parsifal was more of a protagonist than a hero.

I’m sure that John Tomlinson will garner raves galore for his Gurnemanz, and indeed his clarity of diction is something to be cherished, but on this occasion his singing was under-powered, at times drowned out by the orchestra and plagued by too-evident vibrato. Jane Dutton’s Kundry seemed like a work in progress, unsurprisingly given that she had been engaged fairly late in the process, and her singing tended towards the squally. The direction did not help, in that she was pretty much abandoned to her own devices in Act II, to make what she could of that pigeon / tea cosy / carapace. Given the circumstances, she acquitted herself well.

Tom Fox is a new name to me, and he made a strong impression as Klingsor, as did Sarah-Jane Davies’ First Flower Maiden, although hers is a talent with which I’m very familiar. The Squires and Knights all made the best of a bad job, and the chorus was as usual absolutely disciplined; in this area the only disappointment was the off-stage boys’ chorus, which was on the wrong side of ethereal.

Orchestrally, Mark Wigglesworth led a very, very slow, very, very ruminative performance – my, those five and a quarter hours seemed very, very long. To say that he shaped the grandiose phrases with expansiveness would be well, true, but euphemistic. Let’s be honest and say it dragged a bit, but the sound was lovely, iridescent yet not lacking in substance, and all the climactic moments were respected but not isolated. Would that the same could be said of the production.