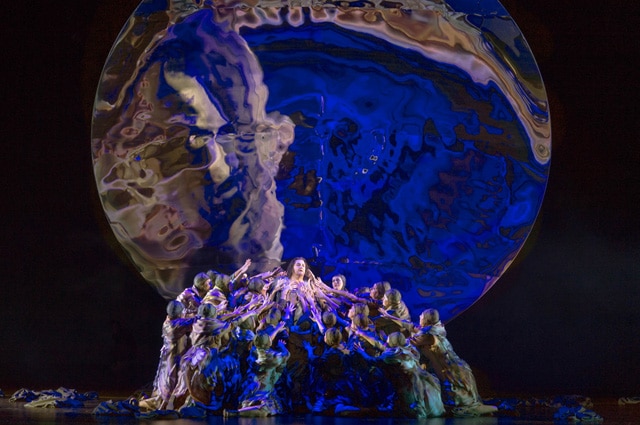 Four years after Pierre Audi’s staging of Wagner’s enigmatic, final opera was first seen at the Dutch National Opera, it returned this week to an ecstatic reception which, a few minor quibbles aside, was wholly justified.

Given the quasi-religious nature of the work, in tandem with its themes of temptation, sacrifice and redemption, the interpretative possibilities are endless. Audi poses more questions than he answers, and choses a cool aesthetic for all three acts, aided and abetted by Anish Kapoor’s abstract designs. Thankfully, given the disastrous Tristan and Isolde at ENO earlier this year, here his designs manage to capture the essence of the work far more effectively.

Monolithic rocks fill the stage in the first act, which make way for a predominantly bare stage in the following two acts. A giant mirror is suspended from the flies to signify Klingsor’s domain, whilst a wall with a giant circle cut into it fills the stage for the third. It all sounds simple enough, but there were disadvantages to each. Jean Kalman’s lighting bathed Act I in red light, which at times made it difficult to see the singers’ faces, whilst the giant mirror sporadically played havoc with the voices as every time Petra Lang (Kundry) or Christopher Ventris (Parsifal) passed in front of it, their voices were amplified to disconcerting effect. Act III fared better, but anyone hoping for a visual realisation of Wagner’s Good Friday Music would have felt short-changed, as the stage, bathed in blue, resolutely failed to mirror the glorious sounds emanating from the pit.

Maybe the staging’s shortcomings would have mattered more if the performance hadn’t delivered on such an exalted musical level, but this was a Parsifal for the ages; gloriously sung, played and conducted. Given the vocal demands that Wagner makes of his singers, it’s rare to encounter a cast without a single weak link, so kudos to the DNO for assembling one that gave unalloyed pleasure in every role. Lang and Ventris are seasoned pros as Kundry and Parsifal, and returned to reprise their roles from the original performances in 2012. Indeed, they appeared together at The Royal Opera in 2007, and any worries that the intervening years would have taken their toll on their voices were unfounded. 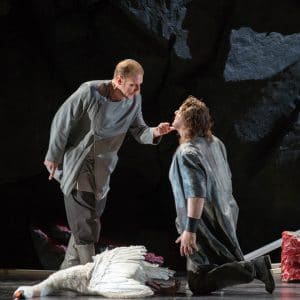 Lang has added the dramatic soprano roles of Brunnhilde and Isolde to her repertoire, and rather than causing wear and tear to the voice, her top is now more thrilling and openly-voiced than before. She is a natural stage creature, and was as compelling in her silence in the last act as she was in the second where she unleashed torrents of thrilling vocal power.

Ventris has sung the title role all over the world, and remains one its finest exponents. Never one to shout or bark, he phrases intelligently and still packs a mighty punch vocally, and matched Lang in their second act confrontation splendidly. His redemption of Amfortas brought a lump to the throat. As the long-suffering Grail knight Ryan McKinny used his firm, resplendent voice to telling effect. His anguish, pain and suffering were almost unbearable to watch, and he rose to magnificent heights in Act III. Bastiaan Everink was a vivid Klingsor, sung with bite and malevolence without ever resorting to barking whilst Bjarni Thor Kristinsson was a properly sepulchral Titurel.

Given the all-round excellence of the cast it seems invidious to elevate one singer above the others, but Gunther Groissbock was nothing short of a revelation as Gurnemanz. Young, handsome, and vocally at the peak of his powers he was cast against type, but having someone in their vocal prime rather than ‘past it’ in this role paid enormous dividends. Gripping in his long first act narration, and glorious in his anointing of Parsifal in the final act, it was impossible to believe that this was his role debut given his performance was so vocally assured and resplendent.

Music Director Marc Albrecht conducted a propulsive and perfectly-judged account of the work, aided and abetted by faultless playing by the Netherlands Philharmonic Orchestra. Act III attained musical nirvana, taking us to another plain that felt unworldly due to its transcendental beauty, whilst the choral singing was superb. Magnificent, sublime and extremely moving, this is a Parsifal that demands to be heard and seen.