by Sam Smith
published: 11 May 2019 in Opera and Classical Reviews
Tweet 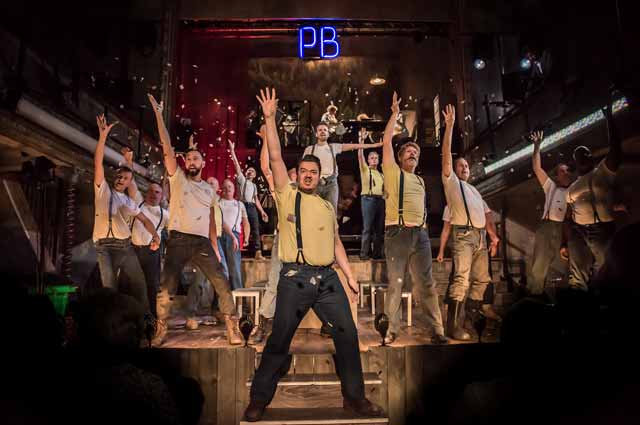 English National Opera’s production of Britten’s first opera Paul Bunyan, directed by Jamie Manton, started life at Wilton’s Music Hall in 2018 and now comes to the newly reopened Alexandra Palace Theatre. The similarities between these two Victorian venues, where the emphasis was originally upon popular entertainment, are quite striking. Both have recently undergone major restorations, in which the aim has not been to undermine the buildings’ senses of age and charm by making them feel like new again, and both have balconies that run directly into the side galleries. As a result, the staging employed in one venue could by and large be transferred to the other, although there is one significant difference between the two places. Alexandra Palace is substantially bigger than Wilton’s, which means that the act of presenting the opera in it represents a development in its own right.

Paul Bunyan is rather a strange creation. One can picture Britten writing his ‘hymn to America’ during the Second World War as a tribute to a country where he was not going to be jailed for his pacifist beliefs, while his librettist W. H. Auden was similarly enjoying the ‘freedom’ of America at the time. Nevertheless, for every promise made that America will be what the people choose to make of it, darker undertones regarding capitalism and repression abound. This production brings out all of the various strands well in a staging that is quite lo-tech, but which feels highly dynamic by virtue of the way in which the space is used.

The proscenium stage is actually occupied by the orchestra, splendidly conducted by James Henshaw, while in Camilla Clarke’s set a second proscenium arch, deliberately designed to create a smaller version of the one that permanently occupies the theatre, is placed in front of it to frame the built up area where the main action occurs. Chorus and characters also appear down the aisles of the auditorium and in the balconies and side galleries so that there are times when the audience feels as if it is experiencing the live equivalent of surround sound. The sound produced when everyone is singing is frequently overwhelming but, because even during the most powerful moments it remains extremely well balanced, the results are often mesmerising.

The three Narrators (Claire Mitcher, Rebecca Stockland and Susanna Tudor-Thomas) generally occupy a second level above the main stage, with their costumes alluding to the quirky but also multi-faceted nature of the production. They wear fancy, and slightly hyperbolic, clothes (partly because the same people are also playing the Three Wild Geese), yet their headwear varies from baseball caps sporting ‘PB’, as might be found in modern presidential races, to hard hats that reference the lumberjack’s trade or even the recent restoration of Alexandra Palace. The song in which all of the men try to woo Tiny reveals both humour and sensitivity, with Manton and choreographer Jasmine Ricketts clearly having worked well with the cast, while the ends of the tails of the cats Moppet (Sophie Goldrick) and Poppet (Lydia Marchione) are actually brushes. The terrible cooks, Sam and Ben, pop out of huge bins, while Helson asks the Moon what she has heard about him by talking on his mobile phone.

Act II does change the tone as it suggests a more industrial society coming into being. When Helson converses with the Heron, Moon, Wind, Beetle and Squirrel they line up in a manner that suggests some conveyor belt style of activity. A row of freezers bearing the name ‘Babe’ now occupies the stage, while string curtains are pulled across the back of it so that the orchestra becomes increasingly obscured from view. Cast members appear in the aisles handing out fast food containers with jelly pigs to audience members, with the ‘PB’ and ‘Babe’ slogans that these carry having now become brands.

The real strength of the production lies in its ability to explore the opera’s many facets within a coherent overarching concept, but some of the ideas take things a little too far. Late on the three Narrators find themselves trapped in the freezers, and the reasons for this are not entirely clear. By this point they have no more ballads left to sing, so it may be an allusion to the death of storytelling or even show how the legend of Paul Bunyan is now frozen in a permanent state for ever more. Alternatively, these people may now be playing the Wild Geese once more, showing how they have been caught and frozen for Christmas, but either way it feels as if the ideas have gone beyond themselves.

The cast is extremely strong, and one of the delights is getting to hear several members of the ENO Chorus in solo roles, with Claire Pendleton as Fido being one of many who stands out. Rowan Pierce gives a beautifully tender performance of Tiny’s Act I aria, while Graeme Lauren and Barnaby Rea display highly pleasing voices and prove enormous fun as Sam and Ben. This is very much a production where everyone will emerge with their own personal favourites, but for me the standout performances come from Elgan Llŷr Thomas as Johnny Inkslinger, who combines a tenor of great appeal with a character possessed of many dimensions, and Alex Otterburn as Hel Helson, whose baritone is strong, assertive and really delivers on all fronts. Paul Bunyan is, of course, never seen, and here his voice is pre-recorded, but nonetheless Simon Russell Beale’s convincing American accent in the role of the eponymous lumberjack also contributes to the strength of the evening.