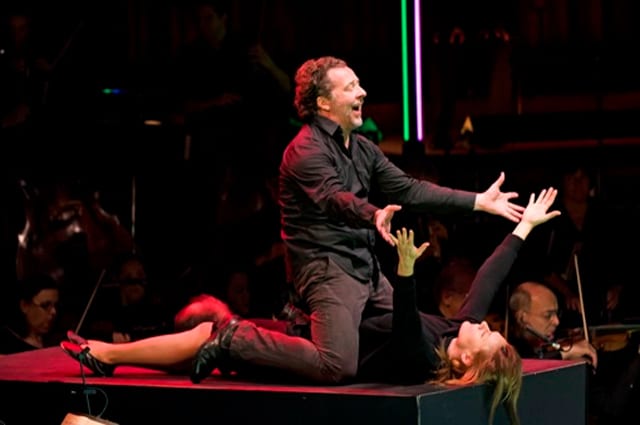 Peter Sellars and Sir Simon Rattle have already collaborated to stage the St John and St Matthew Passion, but staging an opera in a concert hall presents quite a different challenge. With the Passions additional drama is being introduced, while with an opera one is removing scenery, costumes and reducing the space in which the singers can perform. That said, Pelléas et Mélisande, which is no stranger to concert or semi-staged performances, is particularly conducive to Sellars’ approach as it is more emotion than plot driven, and there is much to explore in the symbolism and sub-texts.

One of the reasons Sellars wished to perform Pelléas in a concert hall is that he felt that when the orchestra is placed in a pit the overall sound is to an extent ‘pre-mixed’ before it reaches the audience. On a stage, in contrast, the sound opens out so that greater dialogues can take place across the orchestra.

In the Barbican Hall the London Symphony Orchestra was placed in an innovative and unorthodox formation which really produced dividends. For example, there were beautiful interactions between the solo oboe and strings, while putting the double basses on a raised level behind the wind ensured that they offered far more than just the foundation upon which everything else rested. Clearly, much thought went into where to place each instrument to maximise certain effects, and, in the face of competing needs, some compromises probably had to be made. Nevertheless, there were certain occasions when soloists and instruments could render a special affinity by being in such close proximity to each other. For example, this staging literally fulfilled Debussy’s wish that Pelléas die in the violins.

The vast forces of the LSO took up the majority of the stage, leaving a strip at the front, a block next to the conductor’s podium and a higher area towards the back to act as the main performance areas. However, in another respect, the entire stage was the set as the orchestra became the forest and performers frequently moved between its sections. The block next to the podium was utilised for many scenes that involved just two characters, and using the same area for Golaud’s first meeting with Mélisande and Mélisande’s Act II scene with Pelléas proved perfect because there is even a reference to how similar the two places are. 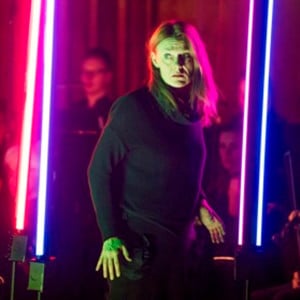 Water is a key element in the work (there are references to stagnant waters and stormy seas), and when the ship’s crew (the chorus) were heard from the balcony it seemed as if the stage represented the land and the entire auditorium the sea. Certainly, this idea was supported by the fact that two scenes involving water took place at the corners of the stage, and hence edges of the land. One corner took on the role of the cave by being bathed in blue light, referencing the blue shadow of which Pelléas sings, while green hues illuminated the stifling waters below the castle dungeon.

Neon lights surrounded the Barbican stage while a triangle of vertically placed ones, perhaps signifying the plot’s love triangle, stood towards the front. Figures often stood within this area as they entered or exited a scene, and placing one figure within and another outside the triangle could reveal the disparity between their physical and emotional proximities. Both Golaud and Pelléas occupied it together on one occasion, and Gerald Finley and Christian Gerhaher portrayed the relationship of the half-brothers superbly. The simple fact that the shades of Pelléas’ shirt and trousers were slightly less congruent than those of Golaud’s spoke volumes about their differing personalities, and the idea that as characters they were so close and yet so far from each other was rendered brilliantly through their acting. They could seem almost identical as they both advanced in profile towards the castle dungeon, and yet as they stood physically shoulder to shoulder but gazed or turned in different directions they felt worlds apart.

In the same way that Sellars’ St Matthew Passion used the drama to play out the sub-texts and feelings of the protagonists, so too did this Pelléas et Mélisande. For example, in the plot Mélisande accidentally drops her ring down the well but here we saw her positively throw it. The point is that we were not witnessing her physical action but what she would like to do, which is to be free of Golaud. Similarly, when in reality Pelléas is at the bottom of the tower toying with Mélisande’s hair here he was seen rolling about with her, while Yniold after spying on Pelléas and Mélisande ran into his mother’s arms symbolising where he would like to seek refuge at this point. In fact, every action seemed twisted in one way or another as the three old men sleeping in the cave were played by three young women.

Although this approach was largely successful, it was not entirely without its problems as the act of playing out the sub-texts forced the characters’ underlying emotions to be exaggerated. For example, when Golaud instructed Pelléas to stop playing childish games with Mélisande his gestures made it clear he was already suspicious beyond belief. This felt at odds with the final scene of Act III in which his suspicion is supposed to grow to uncontrollable proportions, because it already seemed to be at superlative levels prior to this. Such problems grew over the second half, and the Shepherd carrying a mobile phone and handcuffs did not help matters, but the ending was rendered extremely powerfully, perhaps because this is where inner and surface emotion are one and the same. The utter sorrow and despair that the protagonists show on their faces only signify what they are feeling deep down.

Rattle delivered a focused and precise, yet notably sumptuous, account of Debussy’s enigmatic score, while every soloist produced singing of particular focus and precision. As Mélisande, Magdalena Kožená’s mezzo-soprano achieved an excellent balance between directness and fullness, while as Pelléas Christian Gerhaher lifted his secure baritone to another level through the expansiveness of his voice. Both Gerald Finley and Franz-Josef Selig produced sounds of the utmost firmness and strength as Golaud and Arkel respectively, Joshua Bloom’s pleasing bass left its mark in the small roles of the Shepherd and Doctor, while, as Yniold, an uncredited soloist of the Tölzer Knabenchor revealed a beautifully sweet and yet highly developed treble voice.

Simon Rattle dedicated the performance to Pierre Boulez, highlighting his ‘long and powerful’ relationship with the LSO and referencing his strong association with Pelléas et Mélisande, having conducted notable productions at Covent Garden in 1970 and for Welsh National Opera in 1992.

This performance of Pelléas et Mélisande was recorded for future release on the LSO Live label.