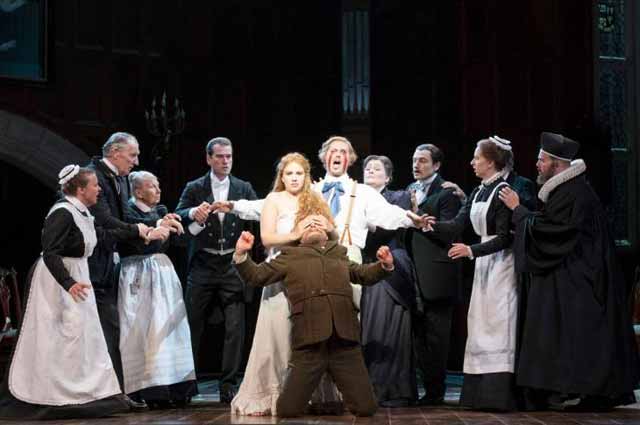 Pelléas et Mélisande is not predominantly plot-driven, but instead provides a ‘metaphysical’ exploration into various themes associated with change. As such, the scenes we witness do not so much present a continuous narrative as provide a series of windows for us to peer through at pivotal moments during an ongoing cycle. Many productions play on this fact, especially given the difficulties that would be posed by trying to represent every location required by the opera literally. For example, James Conway’s English Touring Opera version in 2015 presented a single minimalist set with sharp angles, which hinted at French decadence and values at the start of the twentieth century when the opera was composed, and thus provided the production’s concept.

Stefan Herheim’s new offering for Glyndebourne Festival Opera also works to a single set, but provides a far more specific setting, namely Glyndebourne before Glyndebourne Festival Opera had been founded. Philipp Fürhofer’s set presents its familiar organ room, with several of the paintings to be found in it being reproduced on the walls. There are, for example, the seascapes of Abraham Storck and Jan Abraham Beerstraten, tying in with the opera’s frequent references to water, such as stagnant pools and stormy seas.

There are also the Mierevelt portraits of Christie’s Ancestor, Archibald Clevland and his wife. This said, although the precise setting of Glyndebourne is important to the production, Herheim is not providing a specific commentary on the Christie family. Rather he is using their house as a starting point for exploring the fortunes of a landed family between the wars, where the amount of change in the air was commensurate with that to be found in the opera itself.

In this way, Golaud is an old-fashioned gentleman who adheres to conservative ‘aristocratic’ values, and simply expects a wife to be loyal without thinking much about her needs. Pelléas, who sports a paint smeared white coat as he also resembles Debussy, is a more bohemian and creative type. He instantly feels more appealing, and it seems as if the future is his, and Mélisande’s, to paint. At the start, it is Golaud who destroys the old certainties by not marrying Princess Ursule, but what will take their place seems to be down to his brother. This is suggested by the beggars who are seen in the cave carrying empty easels, as if implying that the future has yet to be painted.

Although the production employs a single set, the walls of this organ room can be opened out, in the process revealing many more pipes that lie behind the ones that are always visible. This creates variety, and it is not always the case that interior scenes take place when the room is fully enclosed and exterior ones when it is more open. A central marble slab that Mélisande lies upon doubles as a well, and descends below the stage to create a hole that Golaud and Pelléas stare into from the castle vaults. 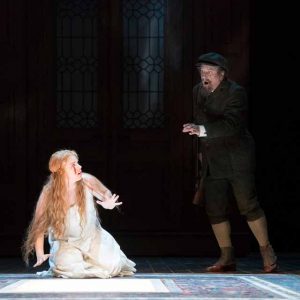 In keeping with the opera’s references to water, projections often appear across the organ and walls to create rippling effects. Herheim and Tony Simpson’s lighting is also put to good use, with some of the simplest moves being the most effective. For example, when the stage turns dark and the candle-like lights in the auditorium come up like stars we instantly know it is night. The organ appears to present a reasonably faithful reproduction of the original although a central entrance to the stage stands where the console normally is. The pipes above sometimes part to reveal in Act III Mélisande in the guise of a pre-Raphaelite painting. From here she throws a rose to Golaud and Pelléas, with it falling so centrally that both men miss catching it. Instead, they end up grasping each other’s hands as they stand over the central hole in the stage. This suggests that at this point their brotherly love is still strong as from this position either could have pulled the other into the hole.

If, however, this represents one of the production’s many excellent touches, sometimes the ideas are laid on so thickly that they undermine the evening’s effectiveness and clarity. When Golaud lifts Yniold to spy on Pelléas and Mélisande he disconcertingly enacts with Yniold what he imagines the pair to be doing. This occurs just before the interval, and after it there are further misjudgements. Christ as the sacrificial lamb appears in the organ as Mélisande previously had, but he simply generates a gaudy image. Meanwhile, the Shepherd is dressed as a Priest, Puritan or possibly Archibald Clevland from the painting, which does not make too much sense.

Throughout the opera main characters and silent servants are present in scenes where they would not normally be, and this often produces dividends. Long before Golaud asks him to spy, Yniold is watching Pelléas and Mélisande, with interest rather than suspicion, as his own clear liking for drawing makes him look like their natural ‘follower’. The huge confrontation in Act IV takes place around a dinner table as if presenting a family feud that the servants present will be gossiping about for weeks. However, from here on the presence, and occasionally heavy movements, of numerous people undermine the central points that need to be made, and hence the amount to which we feel for the main protagonists. Things are further confused by having a second Mélisande adopt silent gestures, and the result is that Act V feels overblown and relatively unmoving.

Robin Ticciati conducts the London Philharmonic Orchestra in an account that is stronger on clarity and shimmer than psychological depth. Nevertheless, this is an extremely beautiful rendering of the score and, notwithstanding some moments when volume levels are not at a premium for the singers, the music feels appropriately nurtured and loved. John Chest as Pelléas reveals a highly appealing baritone while the soprano of Christina Gansch is perfectly tuned to capturing both Mélisande’s spiritual and spirited sides. As Golaud, Christopher Purves asserts his strong baritone to excellent effect, Karen Cargill is a class act as Geneviève and Chloé Briot sings Yniold beautifully.

On opening night Richard Wiegold revealed a magnificent bass as he sang the role of Arkel from the side, while an ailing Brindley Sherratt still acted it. Wiegold has only appeared once before for Glyndebourne (as the title role in Lynne Plowman’s Captain Blood’s Revenge), but following this tremendous performance, and an equally strong one as Daland a few weeks ago for Longborough Festival Opera, he deserves to be heard far more here.

In the final analysis, this production maximises on a major theme of Debussy’s opera, and Maurice Maeterlinck’s Symbolist play upon which it is based, which is the cycle that takes place from calm to discord to the renewal of order. Here, the last of these elements is achieved by the founding of Glyndebourne Festival Opera itself. If watching the opera as a whole leads us to speculate that this might be the conclusion, the final image of the evening leaves us in no doubt.

A semi-staged version of Glyndebourne Festival Opera’s Pelléas and Mélisande will be presented at the BBC Proms at 6.30pm on 17 July. For further details and tickets, visit the BBC Proms website.