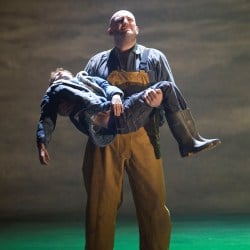 Opera North’s new staging of Britten’s first opera is without doubt the most wholly successful new production of any UK opera company since the Royal Opera’s new Figaro in January. The enterprising touring opera company has just moved back into their home, the refurbished Grand Theatre in Leeds, and I can’t think of a better way of announcing the dawn of a new artistic era for them than Phyllida Lloyd‘s new Peter Grimes.

Although he was a twentieth-century British composer, Benjamin Britten had a love of Italian grand opera, and it shows in Grimes‘ big concerted numbers, its musical evocation of place (tinta) and quasi-Verdian monologues.

The opera is the ideal showcase for a company’s chorus and orchestra, and the latter particularly excelled in this performance at London’s Sadler’s Wells, a theatre which re-opened after the Second World War with the very first performances of this opera. Opera North’s Music Director Richard Farnes brought a plethora of nuances out of the rich score, and the famous Sea Interludes were inevitably the orchestral highlights. For me, the choral singing in the first two acts was slightly understated and not always as strongly defined as it could have been, but the third act was extraordinary: one really did feel that the people of the Borough were out to get Grimes.

Lloyd’s production is impressively resourceful; it’s amazing how much was achieved through atmospheric lighting (by Paule Constable) and smoke. And Anthony Ward‘s sets were simply breathtaking. As the curtain went up, we saw the dead, naked body of the protagonist washed up on the shore. In silence, the people gradually filed in, some of them carrying builder’s palettes that were lined up to form three sides of a square to represent the coroner’s court. At the conclusion of the Prologue, there was a touching moment of tenderness between Grimes and Ellen Orford during the First Sea Interlude; the second Interlude was a breathtaking theatrical feast, as fishermen battled with a huge net that was suspended from the ceiling, during a storm.

One of the pleasant surprises of the current run of performances is the quality of the cast, from Richard Angas‘s booming Swallow to Alan Oke‘s bible-bashing Bob Boles and Roderick Williams‘s exceptionally lyrical Ned Keene. Yvonne Howard was a vivid Auntie, and the greatest singing of the evening came from Christopher Purves as Captain Balstrode, Grimes’ friend.

Jeffrey Lloyd-Roberts could not be faulted for his dedication to the title role. The last time I saw the opera, Grimes was played by Ben Heppner, who is some years older than Lloyd-Roberts. I found some of the opera’s poignancy to be greater on this occasion because of Grimes’ youth: he and Ellen seem to be young lovers, doomed because of Grimes’ character flaws but at the same time, special and shining. Both Lloyd-Roberts and Giselle Allen (as Ellen) gave extraordinary performances in the third act, with Allen’s Embroidery Aria a distressing highlight and Grimes’ closing passage causing the audience to hold their breath in empathetic pain. Before this, though, Lloyd-Roberts had one or two intonation problems, especially in the Pleiades Aria, and both he and Allen could have improved their diction to convey the words more clearly in the early scenes.

But it hardly mattered, because the cumulative effect of the evening was so gripping. This production is a sure-fire hit and it deserves frequent revival. I, for one, can’t wait to see it again.