by Keith McDonnell
published: 1 May 2009 in Opera and Classical Reviews
Tweet 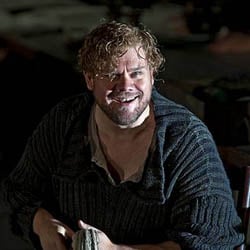 David Alden has directed many outstanding productions for ENO over the years but this coruscating version of Peter Grimes must count as his very best. Not only did the elemental force of the opera come across more intensely than I’ve ever experienced in the theatre before, but his production also confirmed that Peter Grimes is the greatest of all 20th century operas.

It’s hard to know where to start. Very few first nights have been so eagerly anticipated, and I certainly can’t recall as wholehearted endorsement of a new production on the part of an audience as this – the huge ovations accorded chorus, cast, conductor and production team at the close said it all. It was an evening of music-theatre on such an exalted level that it will go down in history as not only one of ENO’s greatest evenings but proof, if proof were needed, that Peter Grimes is a work of such visceral force that when dislodged from its ‘quaint’ historical trappings its ability to shock, and make an audience feel uncomfortable doesn’t diminish, it increases.

There are many ways to interpret Peter Grimes but Alden has taken a probing, even disquieting view of the opera, as anyone familiar with his trailblazing work would expect. He sets the piece roughly around the time of composition, there’s a brilliant whiff of de-mob to Brigitte Reiffenstuel’s wonderfully detailed costumes, but the message he delivers that a tight-knitted community will not accommodate a ‘loner’ is timeless.

He portrays Grimes as an innocent, visionary outsider whose inability to comprehend his isolation from the community is both poignant and deeply moving. Everyone points the finger of blame at him even, or maybe especially, Ellen Orford. Alden’s take on this character is probably his most revisionist, as from the start she is portrayed as a carefree young woman who doesn’t really want to be involved with Grimes but can’t see a way out of it.

When she spots the bruise on Grimes’ new apprentice she has her ‘get out clause’ and her mind is made up Grimes is abusing his new apprentice and that is that. Alden is implying that Ellen is very much the villain here and her act of betrayal is truly shocking. His direction of the chorus is both terrifying and faultless. The opera begins with them huddled at the back of the stage as one mass of shouting, angry townsfolk and as their anger against Grimes increases they invade the stage. This is mob rule at its most repulsive and in the third act manhunt their deranged thirst for blood is almost too frightening to watch. It’s here that some wave tiny Union Flags, and we all know where such misplaced patriotism can lead.

Within Paul Steinberg’s expressionistic and abstract set designs Alden is able to create a sense of heightened paranoia in each scene, and the whole opera is brilliantly lit by Adam Silverman. Of course all this would be academic without a top-flight cast of singing-actors, but fortunately ENO has assembled one of the strongest casts imaginable and all of the principals acquitted themselves admirably. Rebecca de Pont Davies’ Auntie was no big brassy landlady but was portrayed as pin-striped suit wearing Vita Sackville-West character with club foot and cane, and neatly trimmed hair.

Leigh Melrose turned Ned Keene into a proper oily spiv whilst Felicity Palmer’s creepy Mrs Sedley was a lesson in drug-fuelled psychosis. Gerald Finley’s Balstrode not only sang with his customary exemplary diction but was one of the very few ‘sane’ characters on stage whilst Amanda Roocroft, one or two blemishes apart, added to her long list of slightly-unhinged female characters with a steely, unsympathetic yet thrillingly full-voiced portrayal as Ellen Orford.

Stuart Skelton in the title role was nothing sort of sensational. Not only was his acting minutely observed but he sang this daunting role with apparent ease. He had the vocal heft to rattle the rafters in the explosive declamatory episodes and the ability to hone his voice down to barely a whisper for the more introspective moments. His mad scene was almost too painful to watch a stunning performance.

The augmented chorus was exemplary but the hero of the hour was music director Edward Gardner. His reading was taught, visceral and explosive where required and I have rarely heard this score sound so ‘European’ as opposed to ‘English’. The playing of the orchestra was beyond praise I don’t think I’ve ever heard them play better.

There are only eight more performances of Alden’s deeply unsettling production, and no one who believes in the life-enhancing properties that opera can deliver can afford to miss it.