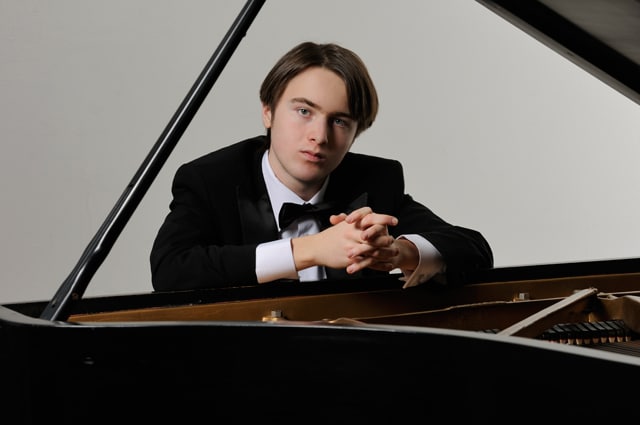 Jakub Hrůša’s reading of the Overture from Smetana’s The Bartered Bride was an exuberant affair. Immediately it was most elegantly obvious that young Hrůša – in his early thirties and hailing from Brno – was adamant that every single instrumental entrance should be on point; every single interplay between two sections, an established and emotional rapport. Despite the somewhat bland festive simplicity of such a work, the Philharmonia Orchestra was far more than prepared to capture every single frame of music that a large ensemble could project: the gentle flow of slender-sounding strings, the punchy hits of fierce attacks, the bounce of jubilance we hear in the staccatos and climactic crescendos.

Admittedly, not every point across the evening glistened. Daniil Trifonov, a pianist of twenty-four, jumped into Rachmaninov’s Second Piano Concerto with a volcanic ferocity. The orchestra’s performance of this piece was lively and adhered most closely to the score. Nonetheless, it neared a brink of caution. On the scale of relativity that is Hrůša’s conducting of both Smetana and later Dvořák, this was a precise but very careful execution. With every single tone of every single section moulded, Hrůša could have tugged a lot more at the rhythm. He could have swayed the orchestra with more rubato and some other unexpected modes of personal interpretation. One sensed that what prevented him was a sincere desire to be careful. Thus it’s worthwhile to note that Hrůša is beyond the need to be so prudent now. His performance proves that he’s a fully rounded artist who can take his liberties of style and very possibly land on some fascinating choices.

It was perhaps this kind of extra caution that inhibited the colourful affair that could have been Rachmaninov by Trifonov. It was apparent at the start of the concerto that Trifonov was ingrained in one select rhythm, and in a single accentuation of one note throughout his arpeggios. This dictated much of his playing in the adagio movement. Whilst the execution rested and relied on soft gentility, on a consistent range of beautifully demonstrated and precise crescendi and diminuendi and the huge feat of the many intricacies fuelling this concerto, at times it seemed that Trifonov was frozen in a similar desire to be steady with his way of playing. This was evident in the last movement where he finally unleashed his furore in the zapping long chains of chromatic scales that became louder, louder, louder; at last treating the audience to flaming passion in its rawest state. The part that really demonstrated Trifonov as an interpreter, that showed us a blank canvas dabbled with his personal array of colours, was a short Debussy encore he performed. Here we heard a motley gamut of contrasting tones and altering reflections.

The performance of Dvořák’s Seventh Symphony branded the evening with uniqueness. Here we heard an orchestra all set to tell a narrative. There was a palpable sensation that informed us that these instrumental sections were aware not just of what their tone was but of what it should be in proportion to that of another section. It was a rare case where in the space of one not-so-beloved symphony we heard a flute sleekly guiding the orchestra as a rudder at one time; at another, horns punctuating doom, then strings effusing brief and gentle floral ditties – then a musical reflection of the soul’s disintegration.

In the second and fourth movements this was notably expressed. Furious and thunderous loud bouts of tremolos were purposely symbolic of a schizophrenic episode. Most actors would have been unable to convey such chaos with a technical precision in the voice and body; the majority of string ensembles would have let themselves collapse with the chaos. Hrůša’s baton executed this less famous symphony as though it were a well-known masterpiece and you believed him. He seduced his listeners, ensnaring them into a new love for a work that rarely tops most lists of favourites. The range of nuances that one could gauge from this one execution was inarguably infinite.

Numerous conductors – some of them older, more experienced – could gain a lot from listening to Hrůša, especially in terms of his striving to foment beauty in both tone and rhythm.