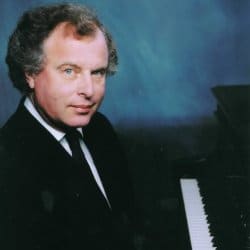 There is certainly no shortage of anniversaries and their celebrations. The classical music year 2006 is dominated by Mozart (born 250 years ago) and, to a lesser degree, by Shostakovich (born 100 years ago) celebrations.

On a much smaller scale we also celebrate Bartk (born 125 years ago) and Schumann (who died 150 years ago).

Schumann appears to be still somewhat underrated or, at any event, not as well known as he should be. Schumann was not only a great composer but also a literary man and, as seen from his Album for the Young, an excellent music educator.

The Philharmonia Orchestra and András Schiff presented a programme which gave us a helpful overview of Schumann the pianist, the chamber musician and composer of symphonies. By judging what I overheard from audience conversations, many of the attendees will try to hear more Schumann after this concert.

Chamber music ingredients are evident in the Introduction and Allegro appassionato for piano and orchestra, op. 92. Orchestral contribution is scarce and discreet in the Introduction, which mostly consists of the piano theme embedded in harp-like non-stop arpeggios and other broken chords, accompanied by a variety of solo instruments (horns, woodwind, strings) playing softly. Orchestra playing is plentiful in the Allegro, heralded by the strong trumpet fanfare (and not by the horns, as wrongly stated in the programme notes).

Most of the time Schiff was very busy with both hands on the piano. More often than not his conducting was restricted to head movements or just to his eyes. It is a great credit to the Philharmonia orchestra that they were fully alert and able to deliver Schiff’s intentions. The last chord of the piece is a good example of the orchestra’s alertness: Schiff wanted a slight but unexpected delay before it and it was done to perfection by the entire orchestra, even though he, too, played the piano with both hands.

Papillons for solo piano, op. 2 gave us Schiff in a role in which he is one of the greatest in the current field: piano playing. His performance of these twelve miniature pieces was beautiful, as well as exemplary in being a faithful rendering of the composer’s intentions. We had clarity of tunes and fundamental bass lines, delicate poetic changes of colours, disciplined rhythmic flexibilities. Technical brilliance was there for all to see in the super-fast ninth piece; the ending of the tenth piece was magical in beauty. Had he seen Peter Wright’s Nutcracker production for the Royal Ballet, perhaps Schiff would have shaped the first two melodies in the twelfth piece (Finale) with more exaggeration and humour. However, Schiff played Schumann’s (and not Tchaikovsky’s) treatment of the traditional Grandfather’s Dance. And his rendering of the six strikes of the bells towards the end of the piece was definitely clear as a bell’.

The horns of the Philharmonia orchestra excelled in the Konzertstck for four horns and orchestra in F, Op. 86. It was nice to see the four solo horn players standing in the limelight (that is, at the front of the stage) and getting a chance for full focus from the audience. One single cracked note reminded me of how difficult it is to avoid this problem on the horn, and how good these players were. The piece demands both virtuosity and stamina from the horn players: we got both.

Schumann’s Symphony No. 4 in D minor, op. 120, was the best-known work at this concert. With its length of about 28 minutes it was also the longest. I was amazed to see three of the four horn soloists from the Konzertstck playing again (and quite a lot) – they must have lips of steel! The chamber music quality, always evident in Schumann’s works (and in Schiff’s artistry), was demonstrated by the beautifully matched solo oboe/solo cello ensemble and by the sensitive solo of the first violin. Indeed, her leadership seemed to be partly responsible for an ensemble rather than a leader/orchestra scenario. I was delighted with the apparently reliable horn, trumpet and trombone fanfares.

Schiff conducted both the Introduction and Allegro appassionato for piano and orchestra as well as the Symphony from memory. This is no mean feat, especially as, of course, he also played Papillons from memory. Schiff knows and respects the music he performs; his concerts are true artistic events. Though on this occasion he seemed to have lost the tension in the final three chords of the symphony, Schiff’s concentration is admirable. He has also become a good conductor. I recall his first conducting attempts with the Philharmonia few years ago and I admit not to have been too pleased about them. However, probably thanks to the Philharmonia, Schiff is now an experienced enough conductor to guarantee quality concerts. Nevertheless, his otherwise strong personality does not yet appear to translate into a sweeping conductor personality. The transition from the keyboard to a large orchestra is not yet fully completed.