by Steven Johnson
published: 13 May 2019 in Opera and Classical Reviews
Tweet 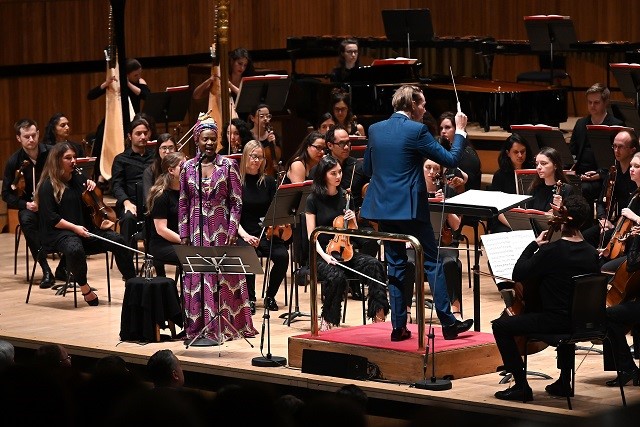 Music history is full of moments where classical and non-classical worlds have overlapped and intersected. Classical music influencing non-classical might be more common, but recent decades have also seen examples of the opposite trend. Electric Counterpoint by Steve Reich was famously built around lines by jazz guitarist Pat Metheny, and more recently Reich’s Radio Rewrite piece was influenced by two songs by Radiohead. There are other examples of classical composers borrowing ideas from the world of pop, but arguably the most celebrated example is the inspiration Philip Glass found in the music of David Bowie, particularly the three albums Bowie recorded from 1977-1979 (Low, Heroes and Lodger).

Tonight’s show at the Royal Festival Hall saw the London Contemporary Orchestra perform all three of Glass’ symphonies inspired by these albums, including the European premiere of his 12th Symphony, modelled around Lodger. In the pre-concert talk, Glass spoke of them as being “collaborations with the material”.

Glass released his Low Symphony back in 1992 and it is arguably the most performed and loved of his symphonies. Consisting of three movements, each based around one song from Bowie’s Low album, it bears all the hallmarks of Glass’ minimalist approach. The majestic serenity of Subterraneans slowly gave way to siren-like brass and filtered percussion. The sharp playing continued during the second movement, Some Are, with the violins carrying the melody with an almost gravity-defying lightness (if anything tonight it almost sounded a touch too light, a fraction overpitched). The third movement Warszawa proved best, all subdued mystery and slow, glorious arches.

Glass’ Heroes Symphony was written four years after Low and tonight somehow managed to sound the more fluid and cohesive piece despite the variation in mood and tone throughout. Second movement Abdulmajid has a strange brittleness to it, while the foreboding brass statements and clarity of expression within the violins of third movement Sense Of Doubt offers an effective juxtaposition. Sons Of The Silent Age sees the underlying circular patterns gradually brought to the boil and V2 Schneider provides a strikingly Glassian finale, where all strands are beautifully pulled together.

For his 12th Symphony Glass adopted a different approach, finding inspiration in the lyrics rather than the music of Lodger. From the start, there’s lots to process with vocals (courtesy of formidable Beninese singer Angelique Kidjo) and organ (played by James McVinnie) appearing alongside the LCO. Initially the vocals struggled to gel with the orchestra and the organ sounded a little underplayed, but both gradually improved. The fourth movement based around the track Boys Keep Swinging works particularly well, especially when the orchestra recedes to allow Kidjo’s vocals space to project themselves without impediment. On another note, Kidjo adds a touch of flamboyancy of which Bowie would surely have approved. The later stages also see McVinnie break free from the mould on the organ to inject further dynamism into the symphony. The orchestral contribution meanwhile is very ‘on brand’ from a Glass perspective – buoyant, cyclical passages with recurring motifs.

It does give rise to some thought around the basis of the piece however. Should Glass be congratulated for pursuing a different way of working in incorporating lyrics (given the criticism he sometimes receives for his dogmatic adherence to style)? Or is the vocal route simply an easier, more diverting option that required less work on the music? Only featuring seven of the album’s tracks did seem an odd, arbitrary decision (based purely on timing – Glass revealed earlier that at this stage he realised the piece was over 50 minutes and that seemed enough).

The first two symphonies performed tonight confirmed his status as a composer and his skill in delivering such a consistent artistic outlook (while also shining light on the playing of the LCO and other musicians involved). The third may have been more uneven and disjointed, but overall this was a successful celebration of Glass’ Bowie-influenced symphonic output.